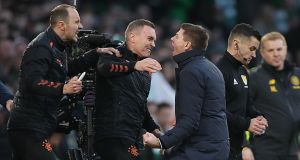 Steven Gerrard claimed Rangers 2-1 win over Celtic at Parkhead was his best so far as a manager.

Nikola Katic’s second-half header, after an Odsonne Edouard goal levelled Ryan Kent’s opener, took Rangers to within two points of the Hoops at the top of the Ladbrokes Premiership with a game in hand ahead of the winter break.

In a typically incident-packed Old Firm game, Gers keeper Allan McGregor saved a penalty from Ryan Christie when the game was goalless and Light Blues coach Michael Beale was sent off at the end, following striker Alfredo Morelos up the tunnel after the striker had picked up a second yellow card from referee Kevin Clancy in added time.

Gerrard, who took over at Rangers in the summer of 2018, said: “It feels the best right now.

“But I don’t want to take anything away from the fact that we have just came out a Champions League level (Europa League) group to qualify for the last-32.

“Celtic are a fantastic team, you only have to look at the recent years and what they have achieved.

“They have serial winners in the team. This is a big challenge for me and all the players but we are doing everything we can to take the challenge to them.

“It is a big moment for the team and the club because it has been through too much pain here, too many defeats and setbacks and knocks.

“It is a big win and huge win because we have come here and dominated again against a very good team, a successful team and a team we have respect for because of what they have achieved.”

Gerrard insisted that the belief taken from the performance in the Betfred Cup final against Celtic earlier in the month, which they lost despite dominating, was key to the first win at Parkhead since October 2010.

He said: “Celtic took a trophy away from us a couple of weeks ago in a game we dominated.

“We came away from that game with huge belief.

“It felt different, we didn’t feel too down because we were so pleased with the performance.

“We didn’t take our chances but we came away knowing that we can compete with Celtic and that is the reason we took the game to Celtic and we got a lot of joy today.

“We can enjoy tonight and enjoy the big victory — there is still loads of work to do.”

Morelos had been booked for a foul on Scott Brown earlier in the game when he was dismissed for taking a dive in the Celtic penalty area in added time.

It is his seventh red card since joining the club in 2017, albeit one was rescinded, and he appeared to make throat-slitting gestures are he left the field.

“We have no complaints on it,” said Gerrard.

“He was a handful again for the whole game, he did some incredible stuff.

“His emotions got the better of him at the end of the game but I think that frustration might have come from the fact that (Christopher) Jullien never got a straight red card moments before it because it is a clear foul on the edge of the box.”

However, boss Neil Lennon does not believe the loss will have a psychological impact on the title race.

“The second goal was poor, a free header in our box.

“You are chasing the game, we had some good chances, one off the line, we missed a penalty and they are big moments.

“There is a break for three weeks now. It just means it is game on.

“If Rangers win their game in hand they will have a one-point cushion. There is nothing in it.

“It’s a test of character now which is good. It is not the time to be over-critical

“We have lost the game but there is plenty to play for and we have time to think on it.”