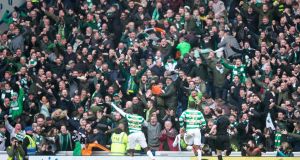 A breathless Old Firm derby defined for so long by dreadful defending was to prove a tale of two strikers.

Rangers, playing against 10 men, passed up a glorious opportunity to press home their advantage as Alfredo Morelos shot straight at Scott Bain when through on goal. In Celtic’s next attack, the substitute Odsonne Édouard curled home a wonderful finish which proved the clinching goal from five. It was a strike befitting the winner of any game, let alone an iconic derby such as this. With two minutes to play, Morelos hit the post when presented with a tap-in to an open goal.

Celtic revelled in this victory all right. So they should have; Rangers’ hopes of entering a title race have surely been handed a fatal wound. Celtic played all but 11 minutes of the second half a man down, Jozo Simunovic having caught Morelos with a stray elbow.

A woeful error by Dedryck Boyata presented Josh Windass with the chance to open the scoring within three minutes, which he duly accepted. Tom Rogic levelled matters with a superb, curling effort from 20 yards. The nature of both teams’ defending meant the scoring was never likely to end there; which made for enthralling stuff.

Daniel Candeias was next to capitalise on Celtic generosity, after a Declan John cross someone found its way to his back post path. In the final act of the first half, Moussa Dembélé restored parity with a clever lob after Scott Brown picked the Frenchman out with a terrific long-range pass. The referee, Willie Collum, is also due credit for playing Celtic advantage as Brown was fouled.

Simunovic’s stupidity could have ended Celtic hopes of their latest Ibrox win. Instead, the arrival of Édouard – a Paris Saint-Germain loanee – proved pivotal. So, too, did the wastefulness of Morelos. Celtic celebrated as if the title has been successfully defended already; it was hard to argue. – Guardian service