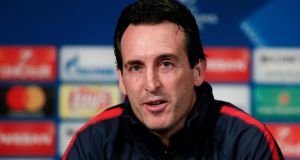 Paris Saint Germain’s head coach Unai Emery: knocking out Real is mandatory if he is to have any chance of avoiding the sack this summer. Photograph: Ian Langsdon/EPA

As he previewed his team’s Champions League showdown with Real Madrid, Unai Emery posed a question and tried not to sound like a man clutching at straws: “Why does Uefa let group winners play the second legs at home?” the Paris Saint Germain manager asked before providing the obvious answer. “Maybe because it is an advantage to play the second leg at home.

“It is the first time in PSG’s recent history we will have that advantage for a big Champions League knockout match and it is up to us to show playing in Paris is different.”

Almost as soon as the final whistle went in the first leg three weeks ago, PSG have been plotting ways to overturn the 3-1 defeat they endured in Madrid. They have done their utmost to ensure there will be a stirring atmosphere at the Parc des Princes, rallying supporters around the slogan “Ensemble on va le faire” – “Together we are going to do it”.

All that is fine and dandy but there is no escaping the fact that PSG’s preparations have been jolted by the foot injury that deprives them of Neymar, the player brought in at astronomical cost to help them reach the stars. For Emery, however, no excuse will be tolerated. Losing Neymar was unfortunate, but losing this tie will be construed as careless.

“I am confident we can do this because we were the better team for most of the first leg,” said Dani Alves, the slightly lesser vaunted of the Brazilians lured by PSG last summer. Alves is right. PSG looked the more likely victors three weeks ago until, that is, Emery made a ruinous substitution in the 66th minute in the Bernabeu, when the score was 1-1.

The decision to replace Edinson Cavani with Thomas Meunier and shift Alves from right-back – where he had been jousting brilliantly with Marcelo – into midfield ceded the initiative to the opposition. Real’s two late goals originated down the flank that Emery thought he had strengthened, while the withdrawal of Cavani took some of the edge off PSG’s attack. The visiting tactician was outmanoeuvred by Zinedine Zidane, who is also under pressure as he returns to France for the first time as a manager tonight.

Emery will not survive more misjudgments. Already fortunate to retain his job after last season’s infamous 6-1 defeat by Barcelona and the failure to win Ligue 1, the Spaniard knows knocking out Real is mandatory if he is to have any chance of avoiding the sack this summer, if not before. It is not a forlorn hope – PSG are capable of turning this tie around. “With Neymar PSG are clearly stronger,” said Alves. “Without him, we are still strong.”

Indeed they are. Neymar had been directly involved in 41 per cent of PSG’s goals this season before breaking a metatarsal bone two weeks ago but the man who will step into his boots tonight, Ángel Di María, has been crying out for a leading role. It was perplexing that Emery did not even introduce him from the bench in the first leg but the Argentinian, whose goal in the 2-0 win against on Saturday Troyes took his haul to 13 from his past 14 matches, seems certain to be given one of the three forward positions in PSG’s line-up.

He is not the riotous dribbler Neymar can be but could damage Real. The team occupying a distant third place in the Spanish league are not, after all, a vintage Real side, a fact that would make elimination all the harder for PSG to bear. – Guardian