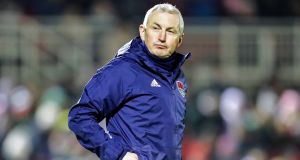 Cork City could put the same seven points that separated the two clubs at the end of the 2017 campaign between the sides just four games into this one if they can beat rivals Dundalk at Oriel Park this evening.

Cork haven’t lost to their rivals in seven meetings and won the recent President’s Cup encounter by scoring four times in the second half but predictably enough, John Caulfield is urging caution.

“They have played three games, they haven’t conceded, and they are unbeaten,” says the City boss of Stephen Kenny’s side who trail the champions by four points after opening the season with two scoreless draws.

“They got eight goals in their last game and will feel they are right back on track. We know it will be an incredibly tough game; it is always difficult up there and nothing but a top performance from us will get us the result.”

Sean Gannon reckons the scale of the win against Limerick will inevitably provide confidence for the home side going into the game but City won’t be short on that score.

Both sides are close to full strength with just John Mountney missing for the hosts while John Dunleavy and Josh O’Hanlon are still sidelined for the visitors.

Joey O’Brien could feature for Shamrock Rovers as they take on Derry City with the former international having apparently overcome a string of fairly minor injuries. Greg Bolger is a doubt for the Dubliners but City have a long list of problems with Chris Turner, Agan Aganovic and Gavin Peers amongst those set to miss the trip to Tallaght.

Waterford head to Sligo looking to build on what has been a strong start but they will be without Dean O’Halloran or Faysel Kasmi, both of whom have ankle injuries.

Rovers boss Gerard Lyttle is missing suspended Scottish midfielder Rhys McCabe and must wait to see whether Ally Roy passes a fitness test after struggling this week with a bruised foot. But Lyttle is expecting better than the performance against Cork which ended in a 1-4 home defeat.

“We handed the game to Cork with the mistakes we made that night because you will always lose matches when you give teams like Cork goals on a plate,” he said.