Ireland under-19 striker joins Scottish champions on a free transfer 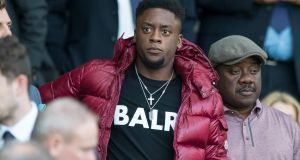 Celtic have signed Republic of Ireland under-19 international Jonathan Afolabi and the 19-year-old was at Celtic Park to watch his new team beat Dunfermline 2-1 in the Betfred Cup on Saturday.

The forward left Southampton’s academy at the end of last season and had been linked with the likes of Crystal Palace, Lokomotiv Moscow and Wolves after helping Ireland reach the semi-finals of the European Under-19 Championship.

“We have signed him on a free transfer and he is one that’s a development,” Celtic manager Neil Lennon said.

“He is sort of on the cusp [of the first-team reckoning]. He will come in and train with us and we will get a good look at him over the next few weeks and see what we want to do with him in terms of his progression.

“He had a great tournament in the Euros. He is raw but he has good potential.”

Lennon would not give much away on other more immediate first-team targets after being linked with the likes of Rosenborg left back Birger Meling and Olympiacos right back Omar Elabdellaoui.

When asked if he could have a new addition before Thursday’s Europa League clash against AIK, Lennon said: “Possibly. Might be cup-tied though.”

Both Rosenborg and Olympiacos are through to the Champions League playoffs.

Lennon had dismissed the prospect of the Scotland youth international leaving the club earlier this summer but Bayern have announced his arrival on their official website.

Bayern academy manager Jochen Sauer said: “Liam had many offers from well-known European clubs. We are very glad that he has chosen us.

“He is a robust, physically strong defender who also brings a lot of quality with his play.”

1 Tipping Point: Eddie Jones’s rhetoric is out of place in a febrile political climate
2 Rory McIlroy heads for Mexico with ‘WGC slam’ in sight
3 Jürgen Klopp wants Liverpool to show they are contenders
4 Maguire and Martial head Manchester United past Chelsea
5 Robin McBryde: Farrell will be judged on results, not style
Real news has value SUBSCRIBE
Crossword Get access to over 6,000 interactive crosswords