Shamrock Rovers move to third spot with victory over Dundalk 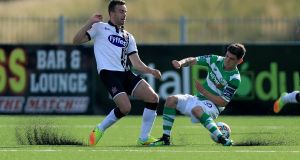 Gary Shaw’s sixth goal of the season condemned Dundalk to their seventh loss of the campaign and moves Rovers into third place, ahead of Derry City and Bray Wanderers in the race for European qualification.

The result compounded a miserable week for Dundalk. Stephen Kenny’s side went the distance before losing to Rosenborg in the Champions League in Norway on Wednesday night and they looked sluggish here.

Things may have panned out differently if they had taken a gilt-edged chance after just 30 seconds of play. A clearance from the back found its way to Dylan Connolly who surged into the Rovers’ penalty area but his drive was brilliantly pushed behind by Tomer Chencinski.

Rovers hit back and edged in front with their first chance of the game after five minutes. Ryan Connolly picked out Shaw on the edge of the Dundalk penalty area and the striker turned Brian Gartland to bury his effort past Gary Rogers.

Brandon Miele almost made Paddy Barrett pay for a sloppy pass minutes later, Rovers’ number 10 lashing an effort just past the upright before Michael Duffy and David McMillan went wide of the mark at the other end.

Kenny’s men fashioned another great opening in the 38th minute. Stephen O’Donnell rolled a free-kick to Connolly and he picked out the run of Barrett at the far post only for the defender to hook the delivery wide.

Rovers probed and controlled the second half and Rogers needed to get a solid hand on a Dave Webster header and a Brandon Miele snapshot to keep Dundalk in the game.

O’Donnell and substitute Thomas Stewart both had half chances late on but the expected Dundalk onslaught never arrived and Rovers never looked in danger of giving up their early lead and held on for a well-earned win.