Cork City knocked out of Europa League by AEK 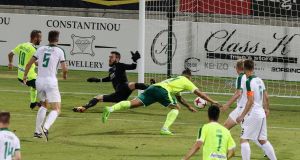 Florian of AEK scores in the first half. Photograph: Sakis Savvides/Inpho

Cork City bowed out of the Europa League qualifiers as their challenge wilted in the stifling heat of Larnaca on Thursday night. AEK advance to the third qualifying round at the expense of the League of Ireland leaders after Florian’s first half goal gave the Cypriots a 2-0 aggregate win.

Having won 1-0 at Turner’s Cross last week, the home side wasted no time in trying to kill off the tie at the AEK Arena. Mark McNulty was called into action twice in the opening five minutes to make important saves as Cork, without centre-half Alan Bennett to marshal the defence, struggled to settle into the game.

It was the 22nd minute before Cork fashioned their first chance with Sean Maguire causing problems down the left before playing in Stephen Dooley who dragged his shot narrowly wide. Gary Buckley then threatened from distance but was unable to keep his effort on target, while Cork forced a first save from Juan Pablo on the half hour mark, Maguire again involved but James Keohane was unable to get enough of his effort to trouble the Larnaca goalkeeper.

And, despite building a head of steam, the visitors paid the price in the 34th minute as Larnaca hit the front with a slightly fortuitous effort. Cork failed to deal effectively with a cross from the right and when it was driven back into the box by Jorge Larena, Florian was first to react to a deflection and steer his header beyond the stranded McNulty.

Florian was a whisker away from doubling AEK’s advantage after an hour, the striker taking advantage of a rare misstep by Conor McCormack in the City defence and firing a low effort just wide of the near post. The introduction of Kieran Sadlier and Karl Sheppard gave john Caulfield’s side some extra width but as the tie entered the closing stages AEK always looked the likelier to score again.

And although Maguire had a decent shout for a penalty, McNulty needed to be sharp to keep out Ivan Trickovski at the other end.

1 The Offload: Ireland are stuck in no man’s land
2 Nicky English: Galway and Waterford face battles with fatigue in All-Ireland semis
3 Davy Russell on neck injury: ‘it was a very close one and I dodged a bullet’
4 Every kind of wind imaginable was against Tipperary football - and they came through
5 Crowds of 4,000 to return to sporting events in England from next week
Real news has value SUBSCRIBE
Crossword Get access to over 6,000 interactive crosswords