Parkhouse’s first-half double does the job for Derry 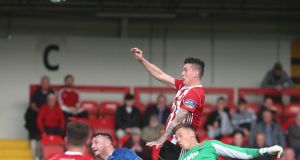 Derry striker David Parkhouse scored twice in the first half to earn his side a deserved victory at the Brandywell on Monday night.

Parkhouse broke the deadlock after a fine passage of play in the 14th minute.

Gerardo Bruna found Ciarán Coll with a superb crossfield pass and the defender’s perfect delivery into the danger area was headed home.

However, the Derry striker saved the best for the final minute of the first half when netting an absolute screamer of a goal.

Michael McCrudden played him in with a cheekily dinked pass and when Parkhouse let fly from 35 yards, the ball flew high into the net, giving Matthew Connor no chance.

Derry dominated the second half, content to own the ball and hit on the break.

Sheffield United loanee Parkhouse missed an easy opportunity to claim his hat-trick in the 69th minute.

An overwhelmed Waterford failed to land a shot on target, their only scoring chances centring on two incidents when Derry goalkeeper, Peter Cherrie, spilled the ball following corner kicks.

The sides will be back at the Brandywell next Monday night to compete in the semi-finals of the EA Sports Cup, a trophy currently held by holders Derry.