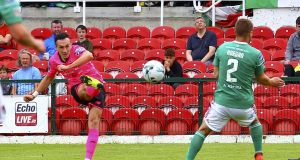 With Shamrock Rovers being held to a 1-1 draw away to Cork City on Sunday afternoon, the champions’ victory stretches their unbeaten league run to 16 matches to move them seven points clear at the top of the table. They also have a game in hand.

Dundalk head coach Vinny Perth made eight changes to the team that started the 1-1 draw with Azeri side Qarabag in their the Champions League, second qualifying round, first leg at Oriel Park last Wednesday.

His close-range volley having brought a fine save from Brendan Clarke in the main incident of a scrappy first half.

Midfielder Mountney scored the game’s only goal seven minutes into the second. As with that first-half chance, the goal stemmed from another Dean Jarvis cross. Seán Murray let the ball run to the unmarked Mountney who planted a left-foot shot to the bottom corner for a composed finish.

St Patrick’s finished the game with 10 men when striker Mikey Drennan was sent off for dissent on 87 minutes for a prolonged protest after a foul on Dundalk goalkeeper Gary Rogers.

Rovers left Turner’s Cross frustrated as they gifted Cork the lead against the run of play on 35 minutes, Daire O’Connor punishing a defensive mistake to shoot past Alan Mannus.

Rovers pressed hard from the resumption and equalised just before the hour through substitute Aaron McEneff who curled a shot to the net from the edge of the area.

Despite their dominance, Rovers couldn’t find a winner.

Third-placed Bohemians played out a 1-1 draw with Sligo Rovers at the Showgrounds.

Danny Mandroiu put Bohemians ahead from a 37th-minute penalty.