Final decision on bid will depend on whether Fifa allows China to enter race, says FAI boss 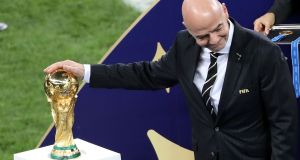 FAI president Donal Conway has suggested that a final decision on whether to mount a joint British and Irish bid to host the 2030 World Cup may not be made until it is known whether a path is being cleared to allow China to enter the race.

Under current rules intended to ensure the tournament is rotated, no Asian nation can host the World Cup in 2030 because it is being held in Qatar in 2022. But, after his re-election in June, Fifa’s president Gianni Infantino hinted that those rules might be changed, and the matter is to be discussed at the next meeting of the federation’s council, which is due to be held in Shanghai in October.

A bid from China would be bound to appeal to Fifa on a number of levels, and if the rules are actually changed to facilitate one being made, then it might be felt by other contenders that the writing is on the wall.

The English, in particular, might be reluctant to get into a race they feel is not going to go their way, after having unsuccessfully bid twice.

For the moment, however, talks are continuing about the possibility of a bid, and representatives of the other associations were in Dublin last week for discussions, but Conway hinted that they may wait and see what happens in Shanghai.

“We are in the preparation of a bid,” he said on Saturday. “All of the UK and the Republic of Ireland; the five associations. We are working in tandem with the other home associations; we are part of that five-association working group, which is what it is.

“We had a session there only in the last week and there is another meeting due in October, so it moves along and it’s still on track that a feasibility study will be completed.

“When a decision might be made might be pushed further out than we had previously thought, though, because there is some talk now that China might have an opportunity of bidding, whereas previously it looked like it wasn’t going to have that opportunity.”

1 Champions League draw: Manchester United handed tough draw on return
2 Leo Cullen: ‘It feels like it all came crashing down on top of us’
3 Dave Hannigan: How Christy Ring aroused the curiosity of American media
4 Johnny Sexton captains Leinster against the Dragons
5 Oisin Murphy denies taking cocaine after failed drugs test in France
Real news has value SUBSCRIBE
Crossword Get access to over 6,000 interactive crosswords