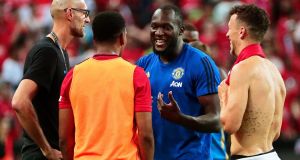 Manchester United’s Romelu Lukaku has been linked with a move to Inter Milan. Photo: Wallace Woon/EPA

Romelu Lukaku has been left out of Manchester United’s travelling squad for Tuesday’s friendly against Kristiansund in Norway.

Lukaku was with United for their pre-season tour of Australia, Singapore and China, but knocks meant the striker missed all four matches.

It’s understood Lukaku has been the subject of a failed €60m bid by Inter Milan, with United giving the Serie A giants a deadline to agree a deal.

On Sunday, a picture appeared on the 26-year-old’s social media accounts of him and his agent Federico Pastorello, accompanied by the message “soon to be continued.”

Lukaku’s name was then missing from the 26-player travelling party that United announced on their official website on Monday morning ahead of Tuesday’s match at Oslo’s Ullevaal Stadium.

Lukaku, after picking up an ankle injury, trained on his own on the eve of the final match of the tour, last week’s 2-1 win against Tottenham in Shanghai.

Defender Eric Bailly is not part of the group heading to Norway after he sustained a knee injury in the victory over Spurs.

Forward Alexis Sanchez is another not included after limping out of Chile’s Copa America third-place play-off match against Argentina earlier this month. Full-back Matteo Darmian is also absent.

1 Sam Bennett secures Champs-Élysées win and Tour de France green
2 Born to ride, born to win: Sam Bennett, the making of a green machine
3 Lance Armstrong’s latest move serving him well on many fronts
4 Keith Duggan: Surreal story of John Delaney needs to act as a wake-up call for FAI
5 Next stop the Champs-Elysées in green for Sam Bennett
Real news has value SUBSCRIBE
Crossword Get access to over 6,000 interactive crosswords