Welsh winger was set for a €1.1m a week move to China but that has fallen through 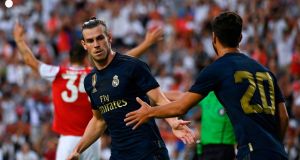 Gareth Bale looks set to remain at Real Madrid, a club that does not want him, after the board blocked his lucrative transfer to China.

The Wales winger had been expected to join the Chinese Super League side Jiangsu Suning on a three-year deal this week with a contract worth more than €1.1m a week. That move is now off after the Real’s board reportedly decided they want a transfer fee for the player who joined from Tottenham in 2013 for a then world-record fee of €94.5m.

The Real president, Florentino Pérez, is believed to have requested an extra payment to sign the 30-year-old, who has three years remaining on the contract he signed in 2016, which is worth around €650,000 a week.

With the Chinese transfer window closing on Wednesday, Bale’s hopes of sealing a move away from the Santiago Bernabéu this summer could now rest on him finding another club in Europe, with Real said to be prepared to let him join a Champions League rival for the right price.

The English transfer window shuts on August 8th – the day before the start of the new season – but no Premier League clubs have expressed an interest in signing one of the world’s best-paid players.

Despite coming off the bench for the second successive match as Real were thrashed 7-3 by Atlético Madrid in New Jersey on Saturday as well as Marco Asensio’s extended absence due to a knee injury, Bale’s prospects of being reintegrated into Zinedine Zidane’s first team still appear slim after the Frenchman’s sustained a very public campaign to move him out of the club.

After leaving Bale out of a pre-season game against Bayern Munich last week, which Real lost, Zidane said he hoped the player would be sold. “We hope he leaves soon,” he said. “It would be best for everyone. We are working on his transfer to a new team. I have nothing personal against him but there comes a time where things are done because they must be done.”

Bale’s representatives are understood to be disappointed with Real’s stance after negotiating the deal with Jiangsu over the past fortnight and with time running out to secure an alternative destination for next season. He has won four Champions League titles with the club but has been sidelined by Zidane since he returned to Madrid this spring for a second spell as manager – a decision described as bad news by Bale’s agent, Jonathan Barnett.

According to the Spanish newspaper Marca, often a mouthpiece for the Real board and Pérez in particular, the breakdown in negotiations with Jiangsu – whose owners Suning also own Internazionale – was caused by a request from Bale’s own family, who would reportedly prefer to stay in Europe.

Zidane remains keen to have the situation resolved quickly, with a potential move for Manchester United’s Paul Pogba possibly dependent on finding a buyer for Bale. Real have already spent close to €333m on recruits this summer but they must balance the books with player sales if they are to finance a move for the France midfielder who will cost in excess of €110m.

Bale has made 79 La Liga starts in the past four years but with Barnett having ruled out a loan move this summer he could find himself left in limbo this season. – Guardian