FAI on course to have funding restored by year end, says Donal Conway

Association holding up its end of the bargain, says returning president following agm 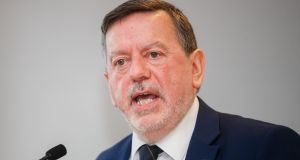 FAI president Donal Conway, who was re-elected unopposed, despite Shane Ross telling Uefa and Fifa that everyone on the old board should go. Photograph: Tommy Dickson/Inpho

Donal Conway believes that Saturday’s successful agm in Trim has kept the FAI on course for a restoration of its government funding, possibly by the end of this year. However, Minister for Sport Shane Ross is understood to have told representatives of Uefa and Fifa on Friday that he still believes every member of the old board should have departed.

Conway, who was re-elected unopposed to the organisation’s presidency, and John Earley of the Schoolboys association will be on the interim board, more than half of which was put in place at the weekend.

By accepting the nomination of the Schoolboys sector, Earley effectively forced outgoing vice-president Noel Fitzroy to withdraw his candidacy on Saturday morning. Returning a couple of members of the old board had been justified on the basis that the Governance Review Group had suggested up to two directors sticking around might provide some continuity, but it was generally accepted that returning three would be viewed as a provocation.

All eight directors so far are men, something that will have to be addressed when the independents are appointed, but several of the new arrivals would be widely well-regarded, and a couple were critics of the previous regime, something that may be pointed to as the association seeks to persuade Ross to restore that funding.

Conway was adamant after the meeting that the organisation is holding up its end of what he portrayed as a straightforward deal.

“The terms of engagement at the outset were ‘reform and funding’,” he said. “That’s what we took extremely seriously. That’s what we want to exhibit. Our commitment to reform, not just last Saturday (at the rule-changing egm), not just today, but evidenced today, for example by the fact that within a matter of weeks there will be an independent chairing the board.

“So, we are going to do our side of things which is to continue with reform. Sport Ireland are doing an audit at the moment and I think that will have a bearing on the resumption of funding too, but I would feel that if we have satisfactorily come through those two things, that funding will be resumed.”

Ross is understood to see the restoration as being dependent on the association getting what might be regarded a clean bill of health in the various inquiries, as well as the completion of that reform process. He clearly remains put out, though, by what he seems to regard as the opportunistic exploitation of a line, not a recommendation, in the Governance Review Group report that he is not alone in believing should not have been there.

In his meeting with representatives of Uefa and Fifa at the department on Friday, the two federations repeated their warnings about the use of public funding to influence how he might lead the association here, but Ross appears to have argued that far from wanting to have a hand in choosing the new board, he simply wants the old one to honour what he regards as a clear-cut commitment to go en masse.

There was a not a single mention of the man who had utterly dominated the event for a decade and a half, John Delaney

He also questioned the apparent failure of the two organisations to take any obvious action to address or even express concern over the many governance failures at the FAI in recent years, despite them having both come under pressure at different times to advance it very substantial amounts of money.

He will presumably have been pleased that one of the issues he had raised in recent weeks, the suggestion that the quorum for board meetings could be dropped to just two, was addressed from the floor on Saturday by UCD’s Brendan Dillon, a former chairman of the National League, whose contributions to the agm were just one reminder of the extent to which things have already changed.

There was a not a single mention of the man who had utterly dominated the annual event for a decade and a half, John Delaney, and there was even an election that not everybody knew the outcome of in advance, with Waterford’s Paul Cooke beating Gerry McAnaney of the Defence Forces for the vice-presidency after Fitzroy’s withdrawal.

Neither would have had a hope of gaining a place at the top table had Delaney still been running the show, something that Cooke acknowledged afterwards.

“If I had gone for election four or five years ago, I wouldn’t have had a chance, I wouldn’t have been welcomed,” said the former newspaper industry executive, an accountant, who has already been involved in helping the association to establish just how big a financial hole it is in.

“Remember, I wasn’t a board member, but in my dealings any information I asked for I was given by the staff, by the board. All I can do is go on my personal experience [but I believe] they are genuinely on the road to reform. I believe we’re on that journey.”

Dave Moran, of the Leinster Senior League, which broke ranks a few months back by declining to express public support for Delaney when a co-ordinated effort was being made to have the grassroots rally behind him, said he was “excited” to be a part of that journey after he too was elected to the new board.

John Finnegan of the Munster FA took the other seat in that constituency while Martin Heraghty of Sligo Rovers and UCD’s Dick Shakespeare emerged as the top two from six in the League of Ireland section, and PFAI solicitor Stuart Gilhooley lost 7-6 to Joe O’Brien in the race of the eighth seat, to be decided on Saturday.

Conway said the process of appointing the four independents will get under way this week.

1 Golf in Level 5 Covid restrictions: Clubs still waiting to hear if they can remain open
2 Gordon D’Arcy: Ireland don’t need to do a Finn Russell on it
3 CJ Stander ready for Italy after lockdown sheep battles
4 Hugo Keenan could start in changed Ireland team against Italy
5 Marcus Rashford is Man United’s hero in the Paris rain again
Real news has value SUBSCRIBE
Crossword Get access to over 6,000 interactive crosswords