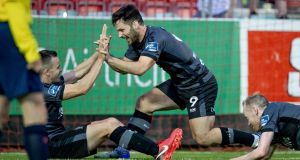 Patrick Hoban scored twice as Dundalk came from behind to take a big three points from Inchicore.

A 10th-straight league victory equals Dundalk’s 50-year record, but more importantly in this season’s title race, it stretches Stephen Kenny’s side’s lead at the top of the Premier Division table to four points.

Despite a bright start, St Patrick’s failed to stop the rot of their horrendous run which sees them create a new club record of seven successive defeats.

Brendan Clarke, back at the club for a third stint, came straight into St Pat’s goal following his arrival from Limerick.

And the prodigal Clarke showed his worth with terrific reaction saves from Hoban and Jamie McGrath either side of St Patrick’s taking a 25th minute lead.

The tenacity of a marauding Simon Madden won a corner on the river side of the ground. Jake Keegan was allowed find room in the area to get his head to Killian Brennan’s delivery, with Dundalk ‘keeper Gary Rogers unable to keep the ball from the net despite getting a hand to it.

Sloppy defending allowed Dundalk to level six minutes into the second half.

Lee Desmond was caught in possession as Michael Duffy set up Hoban to score with a low drive from the edge of the area.

Seven minutes later Dundalk were ahead.

Duffy broke through the middle and fed Chris Shields whose low drive arrowed into the far corner of Clarke’s net.

St Patrick’s strived until the death, with Rogers tipping over a free-kick from Killian Brennan before Dundalk got their third goal on the break three minutes into stoppage time.

Substitute Kristian Adorjan broke to feed Benson who laid the ball off for Hoban to tap home his second goal of the game and 21st of the season.

Ger Doherty broke Limerick hearts at the Brandywell on Friday night, the Derry keeper’s late, late diving save denying the visitors a share of the spoils.

Barry Maguire was presented with a superb chance to madke amends for an earlier glaring miss, but Doherty was up to the challenge, turning the Limerick midfielder’s shot around his post in the 90th minute.

However, that the scoreline remained blank for the opening 30 minutes came as a major shock with both sides squandering clear-cut scoring opportunities.

Derry may have created the lion’s share of those, but they failed dismally to take advantage when well positioned in front of goal.

That said, it was Limerick striker, Connor Ellis, who should have broken the deadlock before one minute had elapsed.

The striker broke on the left flank and having weaved his way into the danger area, his parting shot crashed off the upright and Derry breathed a sigh of relief.

Recent recruit Ben Fisk also went close to breaking the deadlock in the sixth minute but Limerick ‘keeper, Tommy Holland, did well to block the shot from close range.

Fisk then set-up Aaron McEneff whose shot was also blocked by the visiting ‘keeper, before Rory Hale diverted a cross from Jamie McDonagh high over the crossbar.

Debutant striker, Alli Roy, was then presented with two superb chances to mark his debut with a goal but he failed to react quick enough when well placed and both chances were lost.

With Derry failing up front, it was Limerick who broke the deadlock in spectacular fashion.

The ball was worked out to the unmarked Karl O’Sullivan on the left and the winger’s run and superb cross found Ellish who lashed the ball high into the net.

Amazingly, that lead lasted for just two minutes when Derry equalised, through their second debutante on the night.

Like Roy, Aaron Splaine was also cleared to play before kick-off and when the Limerick defence failed to adequately clear their lines, the midfielder controlled the ball before picking his spot from 20 yards, another superb strike.

Limerick were caught cold after the break when Aaron McEneff raced down the left flank and his accurate cross was gleefully swept home by Roy to mark his debut.

On the hour Limerick should have restored equality after Splaine’s attempted clearance was charged down. The ball dropped perfectly into the path of Barry Maguire but the forward recklessly blasted his shot high over the crossbar when he really should have at least hit the target.

Derry’s Rory Hale struck the post with a shot from distance in the 70th minute as the home side attempted to put the game to bed.