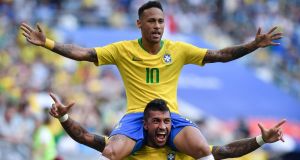 Brazil’s Neymar celebrates on the shoulders of midfielder Paulinho after scoring against Mexico. Brazilian manager Tite insists the PSG man has been putting in a bit of a shift on the defensive side of things. Photograph: Getty Images

While one half of the draw at the World Cup has meant we might have some fairy-tale presence in the title decider, the continued involvement of the biggest names in the other half has given us games to savour in the quarter-finals.

It is their turn to take the stage on Friday, with France against Uruguay providing the opening act before Brazil’s encounter with Belgium.

Brazil possess the shiniest reputation of the lot, and bring levels of expectation that come with the country having lifted the trophy five times; something Roberto Martinez admits Belgium cannot match.

Yet the Spaniard is adamant that his side are their equals in other ways, and relishes the challenge of such a big game. In his pre-match press conference on Thursday he came across as determined that his players can beat a side he regards as similar to his own, although somehow he never seemed entirely convinced that they will do it.

Inevitably he skipped over the detail of how they will try, but Romelu Lukaku provided some small insight into how the European would like to see the game unfold when he suggested that “we will have to vary the way we attack; three of their four defenders are very experienced [right back Fagner being the unnamed but obvious exception] but you cannot keep attacking in the same way. But we have have trained hard for this.”

Yet Belgium have never delivered on the scale now required. Setting aside the England game in which neither side was trying very hard – and Harry Kane’s absence suggested Gareth Southgate really didn’t particularly want his team to score – Belgium’s current crop of players have never beaten top class opponents in a competitive game.

And so, for all the endless talk about the nation’s “golden generation”, they must break new ground together in Kazan or head home early and empty handed again.

The amount of individual talent the group possesses is beyond question, and yet they are more than a little lucky even to have reached this point. Martinez cites Monday’s comeback against Japan as a tremendous show of character, claiming at one point that “it doesn’t get tougher than that”.

The sight of Marouane Fellaini arriving on the pitch and appearing to point at his head seemed slightly comical until he delivered the equaliser with it 16 minutes from time. It did at least suggest that Martinez was open to a spot of Plan B, and in the event that the Spaniard sticks with it throughout on this occasion, as many expect he might, Brazilian manager Tite insists he will be ready.

After that second round game Vincent Kompany made some harmless enough comment about hoping there would be at least a World Cup semi-final to come before he reflects on whether to retire from international football whenever the Belgians might go out of this championship.

Yet by the time defender Miranda faced the Brazilian press here, the Manchester City star was said to be banking on a semi-final, and the 33-year-old reacted with talk of “provocations,” by opponents who have to “hide their own fear”.

If this game was some low-rent brawl the exchange might have passed for a straightforward attempt to drum up a bit of interest. Yet this a different class of contest; more an eliminator for the heavyweight title with the only certainty being that Neymar will spend a good deal of time on the canvas.

Tite came to the defence of the striker when reference was made to the claim that he has rolled about for a fully 14 minutes through the World Cup so far. The 56-year-old coach, who has won much praise for the way the player’s relationship with the rest of the team has been somewhat normalised, even insisted that the PSG man has been putting in a bit of a shift on the defensive side of things.

Miranda and Thiago Silva have been the real heart of that, though; the two 33-year-olds have provided a more solid base here than the team enjoyed in 2014, when the Inter star was overlooked, with just one goal conceded so far.

Their coach talked about all of the organisation that goes into that side of the team’s game with a view to allowing the “inspiration,” to take over when they get into the last third of the pitch. They are, he believes, uniquely well equipped to test opposition defences, and as he rattles off the names of the attacking talent it is hard to disagree.

Yet the particular balance achieved in the most recent matches will be altered against Belgium by the absence through suspension of Casemiro and the possible return from injury of his Real Madrid team mate, attacking left back Marcelo. Paulinho is not completely fit either, and may not last the 90 minutes – a set of circumstances that will potentially allow the likes of Eden Hazard and Kevin De Bruyne to drive Belgium forward through midfield.

It will, both coaches predict, be a great game, and while they might be wrong both of Friday’s encounters have that potential.

And when the games end another two teams’ aspirations to greatness will have been dispensed with. The stakes, it seems, could scarcely be higher. And yet before we know it they will be.

You’ve got to love the business end of a World Cup.