England fans dash to Russia as tickets remain on sale 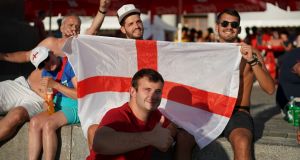 England fans pose for a picture ahead of their 2018 World Cup quarter-final against Sweden in Samara. Photo: Christopher Furlong/Getty Images

England fans have been making a last-minute dash to Russia for the World Cup quarter-final against Sweden after it emerged that their side’s biggest game for 12 years could be played in front of thousands of empty seats.

There were still plenty of tickets available for the match in Samara on the Fifa website on Friday afternoon but a shortage of available flights and accommodation was causing a headache for supporters.

Some have gone to extreme lengths to ensure they will be in the crowd for England’s attempt to reach the semi-finals for the first time since 1990. Chris Waters is one of about 100 England fans who will catch a chartered flight from Stansted airport at 6am on Saturday, travel 1,250 miles to Samara for the match and get straight back on the plane to return by 1am on Sunday.

“It’s a five-hour flight so we land four hours before the game and go straight to the stadium,” Waters said. “It’s worked out quite well because there’s nowhere to stay over there. We tried commercial flights and going via Istanbul but didn’t have any luck. I’ve been off the drink all week and trying to get eight hours’ sleep a night because I won’t be sleeping at all.”

Waters, the chief financial officer of a small consultancy firm, said it had cost him £1,700 in total, “so it’s been expensive but it’s a chance to see England in the quarter-final of a World Cup and that doesn’t come about very often.”

Some fans had paid up to double the face value for tickets from touts, believing there were none still available through official channels but then Fifa unexpectedly released 2,000 more on Thursday night. While tickets are easier to come by than expected, there is almost no availability on Russian internal flights. Russian Railways announced it would put on an extra service for fans travelling from Moscow to the country’s sixth largest city, although by Friday there was no availability on trains either.

Tom Blackwell, a Moscow-based fan, said he had made last-minute plans to travel from the Russian capital to Samara, spending 50,000 roubles (£600) on the 80-minute flight.

Some fans had chosen to arrive in Samara early, taking advantage of cheaper flights and spending more time in the city, where temperatures are much warmer than Moscow. Even if England go as far as the final on July 15th, Samara will be the last trip outside the capital for supporters as both the potential semi-final and the final will be played at Luzhniki stadium.

On Thursday night, strains of Football’s Coming Home could be heard coming from a bar on the Volga embankment, a pleasant pedestrianised area in Samara with a sandy beach on the banks of the river.

The head of tourism for the region, Mikhail Maltsev, said the city expected about 3,500 England fans, compared with 5,500 Sweden supporters at Saturday’s game. While the England team has many Russian supporters, the majority of residents in the stadium are expected to be rooting for Sweden, partly owing to geopolitical tensions between the UK and Russia.

Sweden, like Britain, announced a ministerial boycott of the World Cup, but after the team reached the knockout stages this was rescinded. The British ambassador to Russia, Laurie Bristow, is expected to attend the game in Samara but there will be no representation from the cabinet or the royal family. – Guardian service