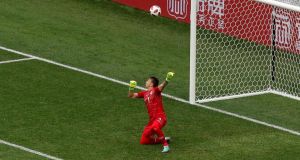 Uruguay are the smallest country to win the World Cup but their defeat to France showed why little countries find it harder to lift the trophy these days. Over the seven matches it takes to win the tournament, it takes extraordinary luck for a smaller country not to simply run out of players, like a meteorite burning up to nothing on as it passes through earth’s atmosphere.

A calf injury had deprived Uruguay of Edinson Cavani, scorer of the two goals that got them past Portugal in the last round. Unlike France, who were without Blaise Matuidi due to suspension, they did not have the reserves to cope.

They gave it their best shot: football means more in Uruguay than it does in France. That was reflected in the stands in Nizhny Novgorod, which were populated by far more light blue than dark. There were also plenty of empty seats, appropriately blue and white in the colours of probably Argentine owners who hadn’t turned up. Uruguay fans who had gone out in Moscow wearing their colours could hardly move for Argentines fans offering to their tickets for sale.

The only Argentine involved out on the field was referee Nestor Pitana, who was clearly aware that this match had the potential to degenerate into acrimony, like England v Colombia, when the American referee Mark Geiger had lost control. Pitana took just a few minutes to show he was no Geiger, when Suarez protested furiously against a challenge by Raphael Varane, miming the Uruguayan’s exaggerated gesticulations of complaint, Pitana bawled something obviously to the effect that Suarez was not refereeing this match, so he needed to shut up and let the real referee get on with his job.

Suarez started the match still unbeaten in meaningful World Cup play - a remarkable record for a veteran in his third tournament. The only World Cup match Uruguay had lost with Suarez on the field was the third-place play-off against Germany in 2010.

He began as though determined to compensate for the absence of his strike partner with sheer ruthlessness. Early in the match he planted his studs into the ribs of Hugo Lloris under cover of a goalmouth scramble. Next he tried to crush France’s willowy right-back Benjamin Pavard, checking the 22-year old’s run with his substantial arse. Surprisingly Pitana did not show him a card; it appeared he was more likely to crack down on open dissent than subtle violence.

Four of the last five matches between these teams had finished 0-0 and from an early stage another scoreless draw looked likely. While Uruguay were busy but limited, France were ponderous, moving the ball slowly and without real purpose. They only came alive when the ball arrived at the feet of Kylian Mbappe, who seemed able to run past opponents at will. The panic Mbappe caused in Uruguay’s defence was obvious and their defensive efforts focused on denying him the ball. When Suarez cleared a corner, he pointed to his left-back Laxalt to close down Mbappe, then ran left to prevent France passing it back out in Mbappe’s direction.

The pivotal moment arrived in the 39th minute. A French move down the right culminated in Corentin Tolisso being hacked down by Rodrigo Bentancur, the only Uruguayan who could miss the semi-final if he was booked here. He was duly booked and it became plain that if Uruguay were going to reach the semi-finals, they would be well short of full strength. To compound their misery, Antoine Griezmann then slung in a superb free-kick, which Godin was about to clear until Varane stole across him and flicked it superbly into the corner.

France had been 1-0 up against Argentina, then sat back in a display of complacent miserliness that was punished by two Argentina goals out of nothing. Uruguay almost scored a quick equaliser with another header from a set-piece, but Caceres’ effort was stopped by Lloris. Maybe this time France would try to put the game beyond their opponents’ reach.

But this is the France of Didier Deschamps and they prefer to keep things cagey. The second half was more of the same, with France happy to contain the tiring Uruguayans. Just after the hour mark, they sealed victory with a goal that was painful to watch. Antoine Griezmann’s shot from 25 yards was going straight at Fernando Muslera, but the Uruguayan goalkeeper misjudged the flight of the ball and spooned it into the net à la Karius.

Given the pride Uruguay take in their ferocious defensive ethic, there was something sad and farcical in their hopes being extinguished by such a goal. Everyone in the stadium knew the game was up at that point, and all that remained was to finish out the remaining 29 minutes, with Uruguay aiming to keep what was left of their dignity and France playing to avoid injuries.

No side at this tournament is quicker, or stronger, or more skilled than France, yet we still await a truly dazzling performance from them at this World Cup: tearing up a shambolic Argentina side does not quite convince. But the fact that they look “hard to beat” rather than “sensational” still leaves opponents with the problem of beating them, and inwardly Deschamps must now believe that he is about to emulate Franz Beckenbauer’s achievement of captaining and then coaching his country to World Cup victory.