‘Strength! Power! Pace!’ are all attributes of the generally excellent Romelu Lukaku 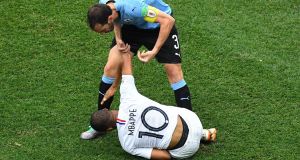 The World Cup drought only lasted the two days, but that was still long enough to leave us all parched. When, at last, the first of the quarter-finals hit our screens it was the footballing equivalent of the hosepipe ban being lifted, France v Uruguay getting us back in to the sprinkly swing of things before Belgium doused us in gorgeousness with that first half display against Brazil.

Is there anything lovelier than Belgium speedily counter-attacking?

Jonathan Pearce told us that Belgium v Brazil was an “FA Cup quarter-final”, which brought a whole new meaning to ‘the magic of the cup’, but football had come back home to our tellies, so magical was the only word.

Which was also the best way to sum up Belgium’s first half efforts.

Lesser historical happenings than the second of their goals – scored by Kevin De Bruyne – have been turned in to oil paintings.

The man of the move, though, was Romelu Lukaku who’s been immense these past couple of weeks. Even when he doesn’t touch the ball. His defence-clearing run that opened the route on the right for Thomas Meunier in the move that led to Belgium’s winner against Japan was evidence enough of a very colossal footballing brain, his dummy to allow the ball fall in to Nacer Chadli’s goalscoring path simply sublime.

And then he set up De Bruyne’s goal against Brazil with an exceedingly brilliant run and pass.

He’s a big lad, is Romelu, but one of these days he’ll be credited by even the laziest of commentators with being as smart as De Bruyne or Eden Hazard.

Don’t hold your breath, though.

Earlier, in the race for the prestigious ‘Most Seamless Link by a Commentator at the 2018 World Cup’ award, ITV’s Sam Matterface ensured he would trail home a distant last when, as France and Uruguay emerged from the tunnel, he uttered the mortal line: “In 1950, when Uruguay last lifted the trophy, the city of Nizhny Novgorod had been struck from all maps by the Soviets in a bid to protect its secrets – the secret is certainly out about Kylian Mbappe.”

“That’s brilliant, that,” Gary Neville didn’t say, struggling a little like the rest of us to spot the connection between the secretive place once known as Gorky and Kylian having a blinder against Argentina.

And as it proved, Kylian had a quiet enough day in what was a damp-ish squib of a game, France kind of inheriting Germany’s efficiency/’job done’ crown , the man of the match undoubtedly referee Nestor Pitana who commenced his day by admonishing a needlessly whining Luis Suarez in a fashion that let Luis know if he kept it up he’d get a root up the ass. Gawd bless you, Nestor.

Raphael Varane headed France in to the lead with a delicious header, before Fernando Muslera had the mother of all mares when Antoine Griezmann dinked a shot his way.

“That was a howler of Packie Bonner-esque proportions,” said Stephen Alkin back on RTE.

“That was Karius-esque,” said Jim Beglin, in an attempt to remove the heat from Packie and update the analogy.

Gary Nev’s empathy levels rose when Uruguay’s Jose Gimenez dissolved in to tears in the closing moments of the game. “That’s embarrassing…. what’s he crying for... just get on with it!” Gimenez, you gathered, was a wuss. (Gazza’s tears in Italia 90? Different. Just evidence of his love of country).

Meantime, Alkin declared that “France are known for their champagne football but they’re going to have to drink something more working class today.” They do too, labouring their way to ousting Uruguay, no frills, mission accomplished.

Full-time and Eamon Dunphy was unimpressed. “France are not a top team.”

“Paul Pogba is not going to win a World Cup winners medal, or a Premier League medal.”

A good player, not a great player?

Back on ITV Mark Pougatch asked Martin O’Neill about that showboating moment from Kylian that resulted in Christian Rodriguez tapping him in irritation, resulting in Kylian out-Neymaring Neymar by collapsing in a heap.

“I’d have chinned him,” said Martin.

And Mart’s irritation with this collapsing business wouldn’t have lessened with the sight of Neymar being Neymar in the second half of the game against Belgium.

Thank you Belgium for sending him home.

“Given the amount of Belgium players in the Premier League, football could well be coming home,” said Gary Lineker, Romelu and his mates looking the business.

And the one before that.

There’ll be no hose-piping going on, so we’ll be tuned in.