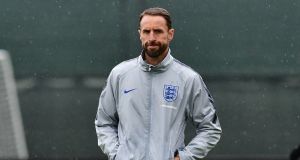 Gareth Southgate, England’s bespoke coach, seems incapable of uttering a graceless remark or behaving with anything other than class. Photograph: Giuseppe Cacace/AFP/Getty

A friend of mine spent a few weeks in the summer of 1996 tumbling through Galway pubs watching the European football championships.

Naturally, he didn’t miss an England game and every time El Tel’s boys played, anti-imperial sentiment ran high across the counter-tops; this was, remember, a little over a year since the Lansdowne riots.

It was the usual Irish pastime of following England’s progression through a major football tournament in a kind of appalled fascination with the thought that they might somehow win the thing – and England were pretty good that summer, their homecoming tournament.

Things began to get serious when they beat a doughty Swiss team, causing one aggrieved punter watching the fare in Myles Lee’s pub to stand up and channel Ciarán Fitzgerald as he bellowed at the television: “Where’s yer f**ken pride, Switzerland?”

By the time England played Germany in the semi-final, every place in town was packed and my friend ended up in a pub in which the atmosphere was one of undisguised loathing at the thought of an England success.

When the game went to penalties, every German score was greeted as if the future of mankind depended on it. What made my friend remember the moment was that he happened to be sitting close to an English family who had the misfortune to be watching the game in the same pub.

Their little boy, no more than ten, was visibly shocked by the unsparing venom on display towards his team, his country. When Germany’s Andreas Moller buckled England with that unforgettably arrogant penalty of his, the pub, my friend says, “erupted in joy”. The little lad was beyond confusion and in tears. “Why do they hate us, Dad?” he asked.

I rang my friend on Friday morning to see how he was fixed at the thought of England winning the World Cup on Sunday week. He actually lives fairly close to England nowadays, in Liverpool.

He was in full agreement that there is something different about this England side, that the old bovver boy element seems absent and that Gareth Southgate, their bespoke coach, seems incapable of uttering a graceless remark or behaving with anything other than class. Talk turned to that little English boy in the pub.

My friend had, in the back of his mind, felt kind of bad about that night. But, the place was heaving and the night was great fun. England had gone out on penalties. They were disconsolate. It was summertime. What could be better? He knew that deep down there was something a bit disturbed about the emotional investment involved in seeing England crushed. But he also knew it was real.

The little English lad would be in his early 30s now. Maybe he has long forgotten about his evening spent with England-hating neighbours. Or maybe it caused him to become chair of his local Brexit committee.

This summer the same sentiment is beginning to bubble to the surface. Whenever an England football team threatens to win a tournament, Ireland panics. Ireland spent 800 years trying to get rid of the English and, once achieved, spent the next few decades obsessing about how to feel about England.

It’s understandable because the vast majority of Irish people from the age 70 down have been blitzed with English pop and cultural references and heroes and voices for all of their lives.

Tens of thousands went to work in English cities, made families and settled; many thousands have been educated in English universities. Kate Bush, Hillary Mantel, Grange Hill, Blackadder, the Beatles, the Busby Babes, Richmal Compton, Robert Smith, Julie Christie, Withnail and I, Brighton Rock, Goldilocks, Top of the Pops, Ted Hughes, Panorama, the Ford Cortina.....England’s touchstones have crowded the Irish imagination for generations and will continue to do so.

Countless Irish boys and girls grew up adoring Bowie or Damon or Amy; countless others spending their Saturdays agonising over the fortunes of the Leeds or the Arsenal or Man United or whoever. And nothing much has changed. The Premier League rules the waves. Countless Irish are hooked on Love Island this summer; how many Irish have binge-watched The Crown on Netflix?

All very well, but what about Cromwell, comes the argument.

What about James Corden?

And it’s true. The bogey man in all his guises lurks deep. There is always a fear about England that the imperial impulse is just taking a nap. England football teams act as a kind of pulse checker. The further they advance, the more loudly Ireland believes it can hear the tone of Cecil Rhodes and the brassy triumphalism of Rule Britannia.

Are we ready to forgive and forget and just allow a pretty decent-seeming bunch of footballers to end the years of hurt?

During the frenzy of Royal Family interest generated by the Harry-Meghan romance and the success of The Crown, Craig Brown’s ‘Ma’am Darling: 99 Glimpses of Princess Margaret’ was published.

“It is a collage, montage or bricolage of glittery bits culled from two hundred biographies, authorised and unauthorised, written by cashiered gossip columnists and treacherous butlers and chauffeurs, plus odds and ends such as the complete transcript of the princess’s Desert Island Discs and the catalogue of her jewellery, sold after her death for £9 million,” summarised Ferdinand Mount in a review which leads into this brilliant passage:

“The effect is like one of those sweeping Klimt portraits, in which the comet trail of colourful fragments leaves a lasting impression of an era on the skids. The book is extremely funny and extremely sad. As Brown says towards the end of it, “It is Cinderella in reverse. It is hope dashed, happiness mislaid, life mishandled. Nothing is as thrilling as they said it would be, no one is as amusing, as clever, as attractive or as interesting.”

All of ‘England’ seems packed into those few lines; the scope, the class system, the sense of an era in decline; dear old Desert Island Discs, the gentle disappointment with it all.

And what has summed up English ‘hope dashed’ – again and again and again – over the past forty years more than the England football team? In Ireland, in a heatwave now, comes the latest test of how ‘we’ feel about it all: are we ready to forgive and forget and just allow a pretty decent-seeming bunch of footballers to end the years of hurt?

Are we grown up enough now to acknowledge that many of us live in England, have found England’s cities to be brilliant places and spend so many of our idle hours lost in English words and English music?

“I know, I know,” my friend and several others agreed.

“I don’t mind if they beat Sweden.”

The strange thing is that the English, almost unanimously well-disposed towards the Irish (at least since the bombs stopped exploding in their cities) have no idea that the Irish feel like this. That’s because they never stop to think twice about the Irish.

They think it’s all over.