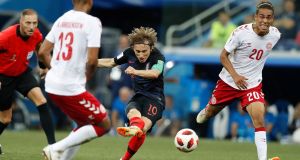 Croatia’s Luka Modric, a product of Dinamo Zagreb, in action against Denmark during the last 16 match the Nizhny Novgorod Stadium. Photograph: Efrem Lukatsky/AP

The Anderlecht academy has been the subject of renewed interest this week and a Belgian side littered with products of the club’s youth development section went on to oust Brazil in last night’s quarter-final.

Down at Dinamo Zagreb they must shake their heads and wonder what all the fuss is about although, to be fair, they are probably not looking for any more attention themselves just now.

Eight of the squad Roberto Martinez brought to Russia passed through the Belgian club’s training complex on the outskirts of Brussels on their way to high-levels careers and, ultimately, this World Cup. But Dinamo’s influence on the Croatia squad that will take on Russia in Sochi this evening is slightly more substantial than that.

Thirteen of the 22 players Zlatko Dalic still has available to him here either came through the youth ranks or had a spell there as a senior player. The coach himself has links with Hajduk Split, historically the other great force in Croatian football, and that club had a hand in the development of a further five of the group. Nikola Kalinic would have made it six had he not been sent home after declining to come on in the Nigeria game. Both of Dalic’s assistants though, had stints with the country’s dominant outfit.

A little over five years ago, the Centre for Sports Studies ranked Hajduk ahead of their old rivals in terms of academy products who went on to play in the stronger leagues across Europe.

But Dinamo graduates certainly seem to grab the bigger headlines these days whether it is Mateo Kovacic at Real Madrid, Šime Vrsaljko with Atletico or Luka Modric and Dejan Lovren in an Osijek courtroom.

The Croatian captain was charged with perjury a few months back over his evidence in a case taken against a number of former club officials for fraud.

Zdravko Mamic, the main target of the investigation, fled the country after being sentenced to six years in prison for taking major cuts from fees obtained when players like Modric were sold abroad and the midfielder landed himself in potentially serious trouble by changing his version of events between the time when he was initially questioned and later gave evidence in court.

The case is reportedly the source of tension within the squad, some of whom refused to get caught up with Mamic whose son would be lined up as their agent at a time when Mamic’s brother was the club’s director of football.

It is just the latest in a series of blows to Dinamo’s financial affairs, though, with the club having previously run into trouble over its determination to benefit from its tax exempt status despite the huge sums it has generated from player sales and the support it received from the Zagreb authorities in the form of subsidies for its academy and the virtually rent free-use of the publicly Maksimir stadium it enjoyed.

A crisis of sorts five seasons ago prompted the board to halve its budget from something approaching €25 million one season to €12 million the next.

Somehow, though, the club appears to have come through it all relatively unscathed. Dinamo have just won their 11th title in 12 seasons, a 19th success in the 27 years the current Croatian league has been run and its academy, based at a complex close to the stadium, which previously shaped talents like Robert Prosinecki, Dario Šimic and Zvonomir Boban, all members of the side that finished third at the World Cup 20 years ago, continues to produce players capable of delivering that success at home then substantial fees from abroad.

A European Club Association report a couple of years back put its total cost over the previous five seasons at €6.5 (a fraction of the sums invested annually at the biggest European outfits) and player sales in that period at around €50 million, yielding a profit of more than €40 million.

But the more recent revelation that a graduate like Modric had contractual entitlements to large portions of those fees and in turn passed much of the money back to Mamic has thrown into doubt all of the previous assumptions about a business model widely admired and copied by clubs all over Europe.

What remains beyond question, though, is the quality of the players being produced.

Most recently left back Borna Sona and attacking midfielder Ante Coric went to Stuttgart and Roma respectively for a reported €6 million apiece. Some of that money is ploughed back buying in talent from rivals or abroad, some of which is also then sold on at a profit with Hillal Soudani, for instance, going to Nottingham Forest last week for something in the region of €3 million, roughly three times what Dinamo paid for the Algerian five years ago.

Half of the senior current squad are home-produced, though, with attacking midfielders Antonio Marin (just 17) and Nokola Moro as well as centre back Filip Benkovic amongst the latest crop to make their way into the senior set-up.

Their huge reputation for selling on players ensures, of course, Dinamo can effectively take their pick of players from smaller clubs’ underage set-ups but their ability to nurture talent and add value has become renowned.

In a sport where numbers plus cash generally leads to success, they have produced the bulk of a squad that has reached the World Cup quarter-finals on what is something of a shoestring by modern standards and despite Croatia having two million fewer people in it than live on the island of Ireland.

A steady stream of foreign coaches visit every year hoping to identify then recreate the formula for their success. If Dinamo could isolate and bottle it, they’d do rather nicely out of selling that too.