John Caulfield: ‘The lads were put on standby for training this evening. It’s not ideal but we are delighted’ 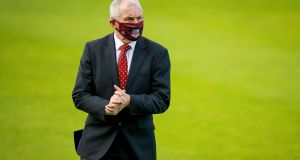 Galway United manager John Caulfield will now prepare his side for a playoff semi-final against Bray Wanderers on Saturday. Photograph: Tommy Dickson/Inpho

Galway United rather than Cabinteely will take on Bray Wanderers in Saturday’s first division playoff semi-final after an arbitration hearing into sanctions taken against Wexford for fielding an ineligible player went the way of the Ferrycarrig club.

The decision made little material difference to Wexford who finish at the foot of the First Division table but the walkover handed to Cabinteely after the two sides drew nil-all in August will now have to be revoked and the original result, a scoreless draw, will stand.

The two points lost mean that Cabinteely will drop two places in the table to seventh and Galway United take their place in the last playoff spots.

“Obviously I’m delighted for the players because they have won seven of the last 10 league games and drawn one, which is magnificent performance,” said Galway United boss John Caulfield. “We looked at it a while back and felt we could make the playoffs but then Cabinteely got the extra two points and that was an unexpected setback because the game in question had been weeks before that.

“The actual issue had nothing whatsoever to do with us, we were just looking on from a distance. We played against UCD the other night believing that we had to win, which we weren’t quite good enough to do, although it certainly wasn’t that we didn’t try.

“Afterwards we were talking about next season but then there was talk yesterday that Wexford had a good chance of winning the arbitration and so the lads were put on standby for training this evening. It’s not ideal but we are delighted.”

Caulfield acknowledged that that the situation was harsh on Bray Wanderers’ boss Gary Cronin too. “He’s been preparing for a playoff game since Tuesday night without knowing who he was going to be playing. I’ll tell you, it’s all a very long way from when you spend two years doing your Pro Licence and you’re taken to the Netherlands and shown around and told all about what professional football is supposed to be.

“We’ve got to get to the stage where these sorts of situations are resolved far more quickly. This certainly should have dealt with last week.”

United’s recent form, especially away from home where they have won their last five, including the one in Bray last weekend, will be a major concern for Cronin, whose side would have started as firm favourites against Cabinteely.

That club’s chairman, Larry Bass, was clearly appalled by the decision on Thursday and believes that it is at odds with the position taken when Cabinteely played an ineligible player in 2015, during the club’s first season in the league.

“I’m not disputing that Wexford acted in good faith on this occasion but we did back then too but we were left with no option but to hold our hands up and pay a fine. We had lost the game so there was no question of points deductions or anything like that but if the rules applied then they should do now.

“But the way this has been handled is the most frustrating thing. We were told last Friday, after 5pm in the middle of a lockdown, that there was to be the arbitration hearing, that the FAI weren’t contesting it and that we had until Tuesday lunchtime to submit evidence. Our club treasurer and secretary both attended.

“On the day, it was stated that only evidence put before the hearing there and then would be considered, all previous evidence would be disregarded and though Wexford argued their case very well, those three and three quarter hours have ended up deciding our season. It all feels rotten to the core.”

Cabinteely had won all four games prior to the one against Wexford on August 7th and won two more after it before suffering a dramatic slump in form.

Wexford, meanwhile, had had four walkovers given against them in relation to games in which Ola Ademeyo played. The player, who had most recently played for English non-league side Lewes, was cleared to play by the FAI after the English FA had apparently signed off on the required documentation. When it transpired, however, that the striker may have signed for a Swedish club during the pandemic but that the move had then not proceeded, the English FA suggested that there might be a problem.

Ultimately he was found to have been ineligible but Wexford were adamant that they had all the necessary paper work and that they should not be sanctioned.

“Wexford FC is astounded at the decision of the Appeals Committee to find against the club in this case,” the club said when its appeal was rejected earlier this month.

“This process is going on for six weeks now during which we have been through an internal FAI investigation, a Fifa investigation, and a disciplinary hearing, all of which found unequivocally that Wexford FC acted in good faith and properly at all times, and that no sanction was appropriate.

“A valid transfer certificate was issued by the English FA in July and the player’s registration to the club confirmed by the FAI.”

Cabinteely are not, they suggest, in a position financially, to take the matter any further at this stage and so Galway United will be in Bray on Saturday night.