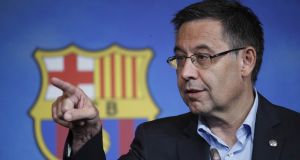 FC Barcelona’s president Josep Maria Bartomeu resigned from his position on Tuesday, together with the rest of the board. He also announced before leaving that Barcelona has accepted the invitation to join a proposed European Super League. Photograph: EPA

Josep Maria Bartomeu was on his way out when he casually tossed in a match and closed the door behind him. It was barely 30 seconds in a 30-minute valedictory address to announce his resignation as president of Barcelona, a monotone line buried in the middle, but it immediately drew a direct question, swiftly followed by many more. Starting with: did he just say what it sounded like he said? Did he really say Barcelona were joining a European super league?

“I can announce news that will have an extraordinary impact on the club’s income in coming years,” he said. “Yesterday, the board of directors agreed to accept the conditions required to participate in a future European super league, a project led by the Europe’s big clubs . . . We have also approved the new format of the Club World Cup.”

And there it was. Bartomeu, on the other hand, no longer was. He reached the end of a speech full of vindication of victimhood, there was some applause from the directors resigning with him 24 hours after insisting there was no reason to do so, and then the Zoom cut. No questions, no details and no way of unsaying it now. All that secrecy and now a man with nothing left to lose had decided he might as well let it out.

He may also have fulfilled a role too, clearing the way for his erstwhile partners. But no one backed him publicly: from Real Madrid, Juventus, Manchester United, Liverpool and the rest came silence.

Javier Tebas, the president of La Liga, called it “regrettable”, “mistaken”: an outgoing president “announcing on the last day the participation in a phantom league that would be the ruin of Barcelona and which confirms his ignorance in the business of football.”It was, he concluded, “a sad ending for a president who had his successes and, lately, his mistakes.” In the English version, Tebas called it a “weak and imaginary competition.”

“The details of those requirements will be passed on to the incoming board and will have to be ratified by a members’ assembly,” Bartomeu said, neither of which is imminent or guaranteed. This was not a presentation or a blueprint, still less an idea anyone other than Bartomeu wants to publicly own yet. Enthusiasm is uneven and the outcome uncertain. But this is not an imaginary, phantom league. If it haunts anyone, it is less the clubs involved, more those left behind. The “extraordinary impact” applies to everyone, a legacy not just at the Camp Nou but across the continent.

At some clubs, there is a belief that a European league is inevitable. Broadcast cycles provide a natural watershed with the calender currently fixed until 2024. Bartomeu’s announcement is a first glimpse of gathering momentum, but it is not a guarantee of anything. It is more confirmation of suspicions already held yet still uncertain. If there is no smoke without fire, Bartomeu was the pyromaniac determined to defend his legacy because if this is to happen, he wants it to be his.

What is put in place remains unclear. Different processes unfold together. The Premier League Big Picture idea; Uefa’s own plans to reform the Champions League, and an idea forming among the biggest clubs to drive change themselves, pushed through by huge, opportunistic investment.

In 2019, Bartomeu had insisted he wanted to reform the Champions League format. “It can’t be that we play many games but not against teams like Liverpool and United,” he said. That plan fell but this is different, piloted outside Uefa. A super league of 18 or 20 teams, feeding into a knockout phase, that would replace the Champions League.

Project Big Picture clears midweek fixtures from the domestic English game, reducing the number of teams and allowing for the Champions League restructuring. Even if not the aim, that would facilitate a European super league, driven by restructured TV rights, online broadcasting and revenue streams, to occupy that space. There is much to be decided: big, broad questions even before the small detail is resolved, let alone the legal ramifications. That includes the greatest of all: which teams take part? What structure does it take? A single league or groups? What of relegation and promotion?

Quite apart from the moral questions, the fears for the future of football beyond the elite, there are issues for a new league that brings together clubs now eclipsing domestic rivals. Those whose status, whose brand, is built on success may soon find not winning a problem. In terms of the economics and number of teams and games, it is smaller than the proposed revamped Champions League.

Within the game, many suspect this is less a real project, more a means of putting pressure on Uefa for greater concessions, flexing considerable muscles before negotiations on Champions League restructuring. The ECA says it is working with Uefa, not against them. That includes Ed Woodward, Manchester United’s chief executive, participating in plans for the expanded 36-team Champions League from 2024.

The Premier League would provide more teams than any other country; it is the biggest market with the biggest clubs, vital partners for European clubs that believe they cannot continue with the continent’s current structure. England’s biggest clubs have more to lose by breaking ranks.

Some of their potential partners in his venture feel they have nothing to lose. Within the game some note there is little evidence the project is ready and few signs of enthusiasm from clubs such as Manchester United. Not enough, perhaps, for the fight.

Woodward has distanced United from a breakaway project and the idea that Fifa would come onboard, happy to usurp Uefa, is not without flaws. Fifa have disowned a breakaway league. The doubt is both their private position and the reaction should they be faced with a fait accompli.

For Barcelona, Real Madrid and Atlético Madrid the need is pressing, particularly in the pandemic. Perhaps the banks see that: weakness and opportunity. This is “a life raft”, runs one judgment from inside the Camp Nou, something to grab, a solution to economic crisis. Tebas claimed the Madrid president, Florentino Pérez was behind Bartomeu’s surprising decision to announce the move. “This league has been a dream for Real Madrid’s president,” he said. “He’s worked for this for a long time, this is nothing new. But it’s a big mistake because he doesn’t understand the financial consequences.”

Tebas, whose relationship with Pérez is strained, may be right. According to Bartomeu, though, the financial consequences of not fundamentally altering European football are dire and ever more urgent. “A European super league for clubs will guarantee the economic sustainability for the club and ensure it continues to belong to its members,” he said. “It will never be a private company. Never.”

His own culpability was glossed over, his self-interest too, this bombshell explained – insofar as it was explained – through survival. It was also unpopular, leaving the club the way he had presided over it: badly.

But, he insisted, this was a legacy he left, necessary to ensure Barcelona do not end up in the hands of a multinational, an oligarch or a state, dropping a match and setting fire to everything before walking out the door for the last time.