‘I am not going to tell you if he is going to play, I can tell you is that he is working very well’ 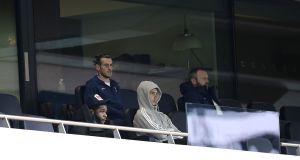 The Wales international has spent the last two weeks training at Hotspur Way after a knee injury delayed his return to the Spurs side following his loan move from Real Madrid.

“Of course he wants to play,” Mourinho said. “He wanted to play since the day he arrived, but it was not possible.

“The last week, especially Monday, Tuesday, Wednesday, the planning of the sessions had a big focus on him and he is in pretty good condition.”

Mourinho confirmed that Harry Kane will start the game on Sunday having arrived back from international duty fit.

“He arrived not injured, he arrived in condition to start the match on Sunday and that is the most important thing for me,” the Portuguese added.

Eric Dier is a doubt due to the injury he picked up on international duty for England, while Giovani Lo Celso and Japhet Tanganga are out injured.

Mourinho described his chairman Daniel Levy as a “genius” for his work in the transfer window this summer.

“Mr Levy showed once more that when he wants and when he is really involved he is a genius in the way he makes deals happen,” he said.

“More than I was expecting. We were talking about different targets but I never thought we would go so far as we did, but I can only praise what the board did for the team.”