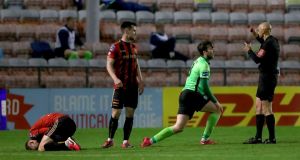 Shamrock Rovers are League of Ireland champions after Mark Russell scored twice as Finn Harps beat Bohemians 2-0 at Dalymount Park, a result that proved decisive at both ends of the Premier Division table.

The Harps midfielder’s strikes either side of half-time meant that Bohemians couldn’t make arch-rivals Rovers wait a little longer to claim their record-extending 18th league title.

Second-bottom Harps’ unlikely victory keeps their hopes of avoiding the play-off alive while also confirming that bottom of the table Cork City are relegated.

Harps took the lead in first half stoppage time when Tony McNamee’s long throw wasn’t dealt with. Kosovar Sadiki headed the ball back goalward where Russell flicked it past James Talbot from close range.

Harps stunned Bohemians further six minutes into the second half.

Substitute Adam Foley’s cross from the right found Russell in acres of space inside the area.

And the winger’s drive may have taken a slight deflection to nestle in the far left-hand corner of Talbot’s net.

Mark McGinley in the Harps goal made terrific saves from Danny Grant and twice from Evan Ferguson before Bohemians left-back Anto Breslin received a straight red card after appearing to kick out at Leo Donnellan on 74 minutes.

Donnellan was then also sent off for a rash challenge on James Finnerty with five minutes to go.

Earlier in the day Cork lost 2-1 at Sligo Rovers.

Cork’s Kit Elliott had an early penalty saved by Ed McGinty before Sligo took the lead through Junior Ogedi-Uzokwe on 11 minutes.

Dylan McGlade levelled for Cork when his 64th minute free kick flew through a crowded goalmouth to enter the net.

But Sligo won it 10 minutes later, Ronan Coughlan scoring with a cheeky penalty.