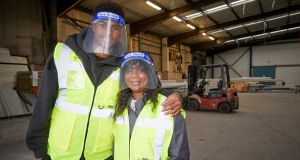 First Marcus Rashford put in a decent shift on the pitch. Then came an even more impressive one off it.

Barely 45 minutes after a pallid, punchless 0-0 draw with Chelsea on Saturday night, the Manchester United striker was back working his second job: a three-hour magic set in which dozens of cafes, churches, restaurants and ordinary folk all promised him they would donate free food to the poorest children in society during this half-term.

Rashford was on social media again most of Sunday too, a one-man nudge unit quietly inspiring the nation to do better while – in the politest possible way – urging the government to do a screeching U-turn by funding free meals in the school holidays until Easter 2021.

“Please message us, we will do all we can,” wrote the Piglets play centre in Hersham, one of hundreds of messages on Rashford’s timeline. “In this day and age it’s a crime that a child should go hungry. Heartbreaking.”

“Privacy is very important and if you need to use the help today nobody will need to know,” wrote Chippy Chippy in Holyhead, offering a side of reassurance with its free meals. “We will deliver the food in one of our cars, no branding, no logos.”

Rashford is surely a shoo-in for the BBC Sports Personality of the Year award. In truth he could also score a last-minute howitzer at Anfield to win the Premier League, or lead England to the World Cup final, and it still wouldn’t surpass what he has achieved fighting for the most vulnerable. Improving lives always trumps medals.

Watching Rashford’s impeccable rise from sportsman to statesman, I was reminded of something the former NBA star John Amaechi once told me. “The world around us has cracks in it and we have athletes with the power to address those fractures,” he said. “We know this because, when we put our face on sugar water or our name to shoes, people buy those goods. We have that kind of power. We can easily wield it in other ways.”

Too often British sports have shied away from the big issues – be it austerity, Brexit, stop-and-search powers, the NHS and immigration – but that appears to be changing. And Rashford is at the vanguard.

Just as impressively, he has been able to carry people on all sides with him. It was noticeable, for instance, that when he thanked Leeds United’s players for donating £25,000 to the school meals campaign, many Leeds fans responded by returning the compliment. Whisper it but might he be the first United player in living memory to be applauded at Elland Road – if fans are back by next April?

It is puzzling how Dominic Cummings and his crack team of superforecasters failed to foresee how voting against food aid to vulnerable families would go down. Perhaps it’s harder to read the room when the only people you see in it look – and sound – just like you? Maybe with the football season back, the government thought Rashford – who had already won a significant victory over school meals in the national lockdown – would have his mind on other matters. That was never going to happen given the United striker, who was on free school meals as a child, has skin in the game.

Yet rather than just condemn the government, he did something much smarter: appeal to their better side – asking them to“put party politics aside and work together to find a long-term sustainable solution to child food poverty in the UK”.

On Saturday he reached further for a consensus by urging his 3.7m followers not to send “unacceptable abuse” to MPs and their families. “Believe me, as a Premier League player, I know all too well what that feels like, and it’s unnecessary,” he said, before calling for “collaboration” and “togetherness”.

You might not recognise this, given the absence of it in British politics in recent years, but this is genuine leadership. If the government is smart it will back a Rashford-backed petition which urges greater access to free school meals, and for more food and activities to be provided for kids to stop them going hungry during the holidays. It is already close to a million signatures. Another, in the name of B Johnson, is long overdue.

And Rashford’s actions have also perhaps reminded wider society that football can be a force for unity and good. The hashtag #hungerdoesntwearclubcolours is full of fans pledging to boycott pay-per-view games and donating £15 to help the vulnerable instead. One campaign, led by Liverpool and Everton supporters, has already raised over £100,000 to the North Liverpool Foodbank. Other supporters – including those from Newcastle, Aston Villa, Burnley, Manchester United and Leeds – have also raised thousands for local food banks.

It is an impressive effort from all concerned, although there is still much to do. As the sportswriter Paul Hayward, formerly of this parish, eloquently put it: “Rashford has exposed Britain’s odd mix of micro-kindness and macro-cruelty. Our deeper economic culture doesn’t enjoy this kind of scrutiny.” Still, in a world of uncertainty and fear, of too many hucksters and hypocrisy, and when there seems so little hope for a genuine change in society, scrolling Rashford’s timeline has been like mainlining serotonin: the generosity and public spiritedness leaping from vein to brain.

Who knows where he will go next. But, given the maturity and surefootedness he has shown so far, would you put anything past him? - Guardian