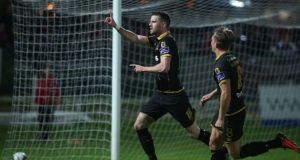 Dundalk’s Ciaran Kilduff: side hopes to reschedule Champion’s League qualifying game as it may clash with the international friendly at the Aviva on August 2nd. Photograph Lorcan Doherty/Inpho

The FAI will on Monday announce a friendly game between two high-profile foreign clubs at the Aviva Stadium for Wednesday, August 2nd, despite the potential for the game to clash with a Dundalk Champions League qualifying game.

If the Irish champions make it through the second qualifying round, their entry point for this competition this summer, in which the home leg will be in Oriel Park, the home leg of the third round will be at Tallaght but the club’s preference is to play on Tuesday, August 1st, if they are drawn at home that week. The club has narrowly missed out on being seeded in the second round.

The FAI, meanwhile has said only that the teams lined up to visit Dublin on the 2nd are among the “world’s leading” sides and have a combined 22 national titles between them.

The number has given rise to speculation that the clubs involved may be Inter (18) and Manchester City (four). Liverpool and AC Milan also have 18 apiece but both appear to have commitments on the date.

Shamrock Rovers will announce Premier League opposition for a summer friendly on Friday morning. The club played Liverpool in 2014 with the game made possible in part because of connections between the two clubs’ kit manufacturers.

A repeat would make Liverpool, their neighbours Everton and West Ham the most likely visitors this time.