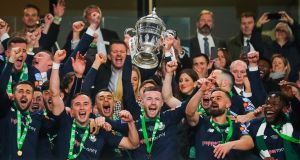 Shamrock Rovers and Dundalk can still meet in the final of this year’s FAI Cup after Friday’s semi-final draw kept them apart. The league winners of the past two seasons are both two games away from the decider, the date of which is yet to be confirmed.

The draw was made ahead of the start of the competition’s quarter-finals on Saturday, and was completed by former Republic of Ireland international Stephen Kelly.

The quarter-finals get underway on Saturday as First Division side Athlone Town look to cause a cup shock against Premier Division team Shelbourne, with kick-off at 3pm.

Dates for the semi-finals have yet to be confirmed, and likewise for the last eight clash between Derry and Sligo. Dundalk and Rovers’ quarter-finals are set for November 13/14th.