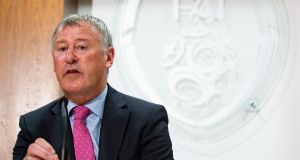 Gary Owens: “There is basically a small group that are not happy and they wrote that email. It wasn’t supported by most people or any, to be honest.” Photograph: Tommy Dickson

Interim CEO Gary Owens has denied there is widespread disquiet at the FAI in the wake of a restructuring he has overseen in recent months.

Just over 60 jobs were advertised internally in recent months with a good deal of movement having taken place since and last week representatives of some of those affected wrote to Owens and other senior figures at the association querying various aspects of the way the process had been carried out as well as the costs involved. In the three page email, it is claimed that staff morale within the association “is at an all-time low”.

Owens met with some of those representatives on Thursday morning for what seems to have been a fairly frank exchange on the issue.

Afterwards, he told the Irish Times the reorganisation was required so as to better align the grassroots and elite levels of the game and that the vast majority of staff at the organisation are much happier now than they had been in John Delaney’s time.

“What we were doing with the restructuring was redefining a lot of the roles in grassroots,” he says, “putting in a new regional structure and new development officers who would be very much aligned with the Club Mark [a programme aimed at encouraging clubs to meet certain specified standards in a range of areas] strategy that we are trying to adopt.

“We got to put in four tiers on the football side; you’ve got grassroots then elite pathways, high performance into the national underage and League of Ireland strategy, linking into the international strategy, so it is all far better integrated now.”

Owens insisted that changes to some roles were an essential part of the process and that the opening up of promotional opportunities to long-serving staff members was seen as desirable. He essentially acknowledges, however, that this has led to losers as we well as winners and suggests that the disgruntlement being mentioned now is confined to the former group which, he says, is very small.

“There are a group involved in grassroots who have been there for a while, about a dozen people and they as we have been redefining roles, they have gone for jobs but not got them and, to be fair, they’re not happy. So there is basically a small group that are not happy and they wrote that email. It wasn’t supported by most people or any, to be honest.”

That is hotly disputed by some of those involved and by Siptu sector organiser Denis Hynes who represents many of the association’s development officers and a number of its other staff.

“Morale is terrible in there at the moment,” he says.

“We worked as hard as anyone to get the additional Government funding for the association and I hear people now saying how happy they are that nobody is going to be losing their job in there. But there are people who are being demoted and then told, ‘well, if you’re not happy, there’s a package on the table, off you go’.

“That might be a relatively small number but they are people with a lot of service to football and the association and there are a lot operating under a 10 per cent pay deferral which we didn’t kick up about the time because there was this suggestion that it would only be for a very short period.

“It took us nearly five years to get the 10 per cent cut that John Delaney had imposed back and in the stroke of a pen that has gone again.”

Some of those affected are understood to be on as little €30,000 a year.

“Over the summer we had talks about the situation and we were given assurances that various issues would be addressed, there was supposed to be a benchmarking process and we were told that would start within weeks but none of that has happened.”

His members and other staff are, he says, at a loss as to why Owens embarked on such a major upheaval when he would not be staying on. Owens says it was because he was acting to implement the recommendations of various reports on the governance and financial sides of things and of HR specialists and management on the football side, in relation to the organisation of staff.

Owens accepts that incoming CEO Jonathan Hill might want to make additional changes but insists the association is in far better shape now than when he arrived and that “the bulk of that work has been done. Jonathan might want to put his stamp on it but that will only be 10 per cent or so of what has been done”.

Amid talk among staff of cases being taken for constructive dismissal, however, and unhappiness that new managers have been appointed while the pay deferrals are still in place, Siptu have requested a date for mediation at the Workplace Relations Commission although Hynes clearly hopes that the situation can be resolved directly.

An improved financial outlook would help, of course, and Owens confirms that Sport Ireland have been sufficiently happy with the general reform process to restore public funding to the association.

“We’ve had nearly €2 million paid to us,” he says. “That’s the first time we have had any money from the Government in the best part of two years. They [Sport Ireland] had been clear that once we delivered on what we said we would deliver on, then they would give us the money, and we have.”

He now expects a further €3.8 million to be paid by the end of the year and for news regarding the association’s application for one-off coronavirus related funding of €19.3 million to come through in the coming weeks.