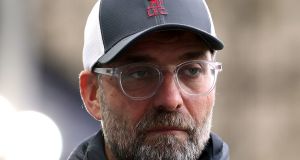 Jürgen Klopp has accused Premier League chief executive Richard Masters of a lack of leadership over the decision to abandon the five substitutes’ rule with anger growing among managers at the rise in muscle injuries this season.

Manchester City manager Pep Guardiola condemned the “sporting directors, the presidents [and] the chairmen” who voted against persisting with five substitutes in the Premier League following its temporary introduction during Project Restart. Frank Lampard, Steve Bruce and Ole Gunnar Solskjær have also voiced criticism after a report by Premier Injuries showed a dramatic 42 per cent increase in muscle injuries already this term.

Fifa sanctioned the continued use of five substitutes in all competitions until August 2021, with Germany, Spain and Italy among the European leagues to accept. But a majority of Premier League clubs, arguing the rule favours teams with bigger squads, voted to revert to three substitutions. The Liverpool manager believes the decision should be reversed and may never have been taken had Masters delivered a more informed argument at the outset.

Klopp said: “It should be [back on the agenda] but I don’t think it’s possible because of the system. It doesn’t help obviously when Chelsea have injuries, and City and Liverpool and United and Tottenham and Arsenal and Leicester, because that is not enough votes for the rest.

That is the system. I thought it should have been back in in the first place.

“For me it is a lack of leadership just to put the question on the table and say: ‘So what do you want with that?’ It should have been sold – if that’s the right word – differently with more information, showing more of what could happen, by Richard Masters. We never asked for any advantage.

“None of the top seven clubs asked for any advantage. We just knew, because we knew our schedule, that it would be incredibly difficult. To have the best games at the weekend in the Premier League, it would have helped that as well. I think we should think about it again.”

Guardiola, like Klopp, has lost several players to muscle injuries while wrestling with the dual demands of Champions League football and a condensed Premier League campaign. He insists every club has a duty to protect players’ welfare, not only those in European competition.

The City manager said: “It is time to take care of the main reason why everybody is in this business – the football players. Five substitutions is not about the advantage for some teams, it is to protect the players – all of them in the last 15, 25, 30 minutes. When you play every three days you start to suffer.

“Why is it happening all around the world in all the leagues – Italy, Germany, Spain – and here where it is more demanding for many reasons we cannot protect the players? It’s not to protect Manchester City. The stats speak for themselves – almost 50 per cent more muscular injuries than last season. Why? Because the players play and look to recover from the previous game but most of them are still recovering from the previous season so why should we not do it? No sense, no sense.”

Guardiola reserved much of his anger for club officials who voted against the proposal without consulting managers. He added: “Who voted? The sporting directors, the presidents, the chairmans: who are they to decide this? Who are they? They have to protect the players.”

His words were echoed by his Manchester rival Solskjær. The United manager said: “I don’t understand and cannot believe that the vote went against because we have to look after the players. This season is the most demanding season of all. I can see the point why clubs voted against but if you take a step back and think about these professional footballers and their mental and physical health the only sensible solution would have been to give us the opportunity to rest a few more.”

Klopp will be without Fabinho against West Ham on Saturday after the midfielder, who has been deputising for Virgil van Dijk in central defence, suffered a hamstring injury against Midtjylland. The Brazilian is expected to return after the next international break.

Van Dijk, meanwhile, has had surgery to repair his damaged ACL in London and Liverpool have declared the operation a success.