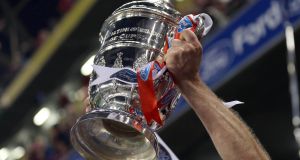 After the game at Haddon Park finished 3-3, extra-time couldn’t separate the sides, leading to a marathon shootout which eventually saw the Premier Division side prevail 7-6.

An upset seemed likely as Killester held onto the early lead given to them by Stephen Chambers until 18 minutes from full-time. At that point, Ronan Murray bagged a five-minute brace and, though Lennie McMillan made it 2-2 with eight minutes left, Murray’s hat-trick goal looked to have nicked it for the Tribesmen. There would be one more twist with Chambers collecting his second to force extra-time. Jonah Ayunge converted the decisive attempt of an 18-penalty shoot-out.

Elsewhere on Sunday, a goal late in each half earned St Patrick’s Athletic a 2-0 victory at Portmarnock. Christy Fagan’s pinpoint header in stoppage-time at the end of the first half broke the Leinster Senior League side’s resistance and the passage for St Pat’s was secured by Gareth Whelan scoring an own-goal with two minutes remaining.

Portmarnock – who reached the semi-final of the FAI Intermediate Cup in 2016 – frustrated the Premier Division side for long spells and the challenging surface at Paddy’s Hill didn’t lend itself to free-flowing football. Once their top scorer Fagan nodded home from Conan Byrne’s cross, however, it was one-way traffic for the Saints. Byrne also had a part in the second by drilling a low delivery across the six-yard box which former Drogheda United defender Whelan swept into his own net.

There was a welcome win for Drogheda United as they put four goals without reply past Evergreen. Chris Mulhall gave them an interval lead, built upon by strikes in the final 20 minutes by Ryan Masterson, Mulhall again and Mark Doyle.

Bluebell United, with former international Keith Fahey instrumental, brushed aside Sheriff YC 3-0 thanks to goals by Gary Seery’s early brace and a penalty from Dean Ebbe.

In Saturday’s action, Sligo Rovers crashed out 4-2 in extra-time to Longford Town. While Daniel Kearns and Benny Igiehon had helped put Sligo 2-1 ahead at half-time, they were undone by Sam Verdon’s equaliser with eight minutes left. Extra-time goals from Peter Hopkins and Kealon Dillon sunk Sligo, who also had Jamie McDonagh sent-off late on.

Holders Cork City advanced with a 1-0 victory over Bray Wanderers, courtesy of Kieran Sadlier’s winner on the hour, and Limerick produced a 3-0 win at Cobh Ramblers.