Firmino gives Liverpool cause for optimism 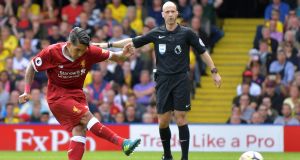 Liverpool’s Roberto Firmino scores from the penalty spot against Watford. The Brazilian is showing the form that earned him rave reviews at Hoffenheim, who Liverpool face on Tuesday. Photograph: Olly Greenwood/AFP

Liverpool arrive in Germany on Monday in less than ideal shape for their Champions League qualifying play-off first leg with Hoffenheim.

Questions are once again being asked about their defensive capabilities following a somewhat shambolic showing at Watford on Saturday and with uncertainty continuing to surround the future of Philippe Coutinho.

Fresh season it may be but for Liverpool that fresh optimism is already being tested. It is too early, of course, for total doom and gloom, and especially so with Jürgen Klopp around.

Liverpool’s fiery manager will no doubt have his team fired up for Tuesday’s encounter at the Rhein-Neckar-Arena, instilling in them the belief that they can take a crucial step towards their ambition of returning to the group stages of Europe’s elite competition for the first time in three years.

For Klopp the match represents a return to a venue he knows well from his Borussia Dortmund days while for one of his players in particular, the sense of familiarity will be even stronger as he attempts to emphasise his credentials as a vital part of Liverpool’s pursuit of former glories.

Roberto Firmino spent 4½ years at Hoffenheim before moving to Merseyside for €32 million in June 2015. During that time the Brazil forward developed a reputation for being one of the most hard-working, astute and creative players in the Bundesliga, something that has burgeoned during his time at Liverpool after a difficult start during the final days of Brendan Rodgers’s tenure at the club.

It was not until Klopp arrived in October 2015 that things changed. The 25-year-old was moved into a central attacking role as part of the manager’s fluid 4-3-3 formation and immediately flourished, and it was somewhat of a shame that Liverpool’s late collapse at Vicarage Road overshadowed another excellent display by their false No9, who is now their actual No9 following a change of shirt number over the summer.

It was Firmino who led Liverpool’s second-half fightback after they found themselves 2-1 down at the interval, using his clever and relentless movement to unsettle Watford’s back four as well as being the man who directly contributed to the two goals the visitors scored in that period – playing the pass that led to the 55th-minute penalty, which he scored himself, as well as the lofted cross-cum-shot that Mohamed Salah converted to make it 3-2 shortly after.

Had Miguel Britos not equalised three minutes into injury time with a goal that was scored from an offside position but nevertheless highlighted Liverpool’s brittleness at set pieces, with Stefano Okaka having done the same via a header after eight minutes, it is likely there would be more positivity surrounding Klopp’s team right now, and specifically focused on their attacking play, which once again was excellent at the weekend.

Salah shone on his debut after his €37million move from Roma in June, while on the other flank Sadio Mané simply picked up from where he left off last season, scoring a sumptuous goal on 29 minutes and generally terrorising those in yellow and black with his devastating pace.

And in between them was Firmino, a player who can be fully appreciated only by being observed in the flesh such is the amount of work he does off the ball, something Klopp alluded to last month.

“People say he does not score enough. What?! He is the best player without scoring with how well he reads the game for the benefit of others.”

Having scored 47 times in 151 appearances for Hoffenheim, Firmino has maintained a scoring rate of almost one goal every three games at Liverpool (24 in 80 starts across all competitions) but, as Klopp, says, his benefit to the side is broader than that.

There are the runs into channels to drag defenders away, the runs at defenders to start a counter press and, as witnessed on Saturday, the perfectly weighted passes under pressure that led directly to scoring chances, for himself as well as others.

What felt apparent at Watford is that Firmino is now the established leader of Liverpool’s attack, and while it would be devastating for the club to lose Coutinho – with Klopp’s ambiguous comments after the Watford game only adding to the sense that the 25-year-old may well be on his way to Barcelona after all – they at least have another Brazilian who can be relied upon to get, and keep, those in red on the front foot.

Life under Klopp has not been plain sailing for Firmino. The forward suffered a slump in form during the winter months of last season, a period when he was banned and fined £20,000 for drink-driving. But he undeniably appears revitalised and refocused before his return to south-west Germany this week.

Hoffenheim, upwardly mobile under the management of Julian Nagelsmann, pose a serious danger to Liverpool but they will be more wary of their opponents than the other way around, and particularly so of Firmino, the man one German newspaper once described as a “master of moving around without anyone noticing”.