Manager José Mourinho: ‘I’m happy, I think it was a very positive performance’ 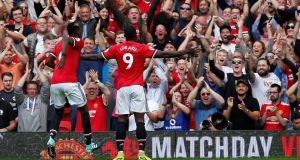 Romelu Lukaku described it as a “dream come true” after he scored twice on his Manchester United Premier League debut.

The £75million summer signing struck in each half as United thrashed West Ham 4-0 at Old Trafford.

The Hammers were completely outplayed and could easily have trailed by more goals before substitute Anthony Martial and Paul Pogba finally put a more realistic slant on the scoreline in the closing minutes.

“To play in front of such a crowd and for such a great club, it’s a dream come true,” Lukaku told Sky Sports. “The most important thing is the win — the win was good.”

Asked whether he felt relief given his hefty price tag, the Belgian added: “No, just joy for the team. When you play for Manchester United everybody has a job to do and mine is to score goals for the team.

“The team did a good job today, everybody was creative.”

“The pressure is with them. It’s always nice for their confidence.”

Despite seeing his side go top of the embryonic table, Mourinho still felt United could have come out of the blocks quicker.

“Then of course, score the third goal and you can breathe and play with a lot of confidence.

“I think the reality of the game, this was always a difficult game for us.

“We didn’t start especially well, we were a little bit nervous for 10, 15 minutes. Then we had a quality performance, good personality, they played with lots of confidence and have given the result.

“The team was confident and played great football. I’m happy, I think it was a very positive performance.

“The performance again, the levels of confidence, is what matters for me. We got three important points.”

West Ham manager Slaven Bilic admitted his side had been outclassed.

“I expected more of course, but I have to admit they were a much better side in every aspect of the game,” he said.

“We knew they had a strong side of course, but I expected us to do much better.

“We started okay but then it was missing, we were much slower than them.

“It’s very hard to find any positives now when you lose 4-0.”