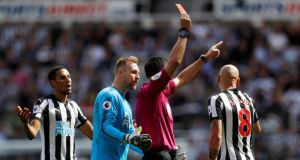 Familiarity can so often be wonderfully reassuring but, for Newcastle United, it all too often provokes depression.

There was to be no exception to this general Geordie rule on Sunday when the sight of Mike Ashley with his arms determinedly folded in the directors’ box simply served as a reminder of how the club’s owner has let Rafael Benítez down in the transfer market this summer.

As if that was not sufficient, a moment of mindless, all too typically self destructive, stupidity from Jonjo Shelvey – namely stepping on Dele Alli’s ankle in front of the referee – at the outset of the second half saw Benítez’s side reduced to 10 men.

Goals from Alli and Ben Davies consequently enabled a visiting team who had hitherto struggled to undo Newcastle’s defensive organisation and, at times, looked as if they might be as borderline mutinous about their remuneration levels as the currently injured Danny Rose has suggested, to secure the lowest of low-key wins.

If a season of potential struggle beckons for Benítez, Mauricio Pochettino’s players – albeit dominant here – will need to up their games if another title challenge is to be mounted.

In one sense the first half went reasonably well for Newcastle; Rob Elliot’s goal was barely threatened, Christian Atsu’s pace periodically troubled the young debutant Kyle Walker-Peters, Dwight Gayle looked lively if not exactly subtle and Pochettino’s mounting frustration seemed highlighted when he ordered Moussa Sissoko and Christian Eriksen to swap flanks. Arguably, most reassuringly of all, the Tynesiders were defending very well.

Yet there was still plenty to leave Benítez with a distinct sense of unease. Foremost among his concerns must have been Shelvey’s struggles to touch the ball, let alone unleash a penetrative playmaking pass but Newcastle’s collective penchant for forfeiting possession far too cheaply can hardly have represented a cause for optimism.

It did not help that Paul Dummett’s early attempt to prevent Sissoko initiating a counterattack left the home left back hamstrung. That injury prompted Dummett’s seventh minute replacement by Jamaal Lascelles with Benítez’s club captain swiftly proving his worth courtesy of a difficult block to deny the impressive Moussa Dembélé driving a shot into the bottom corner.

The substitution interrupted Newcastle’s initially ferocious tempo and, inexorably, Spurs began controlling the pace – and dominating the ball. Benítez’s best hope appeared to rest with getting men behind the ball and thwarting his guests before using the pace of Atsu and Gayle, to get behind Pochettino’s high defensive line on the break.

Sure enough one such counterattack did conclude with Walker-Peters tripping the striker in the area. It would have been a certain penalty – if the assistant had not flagged for offside against Gayle. If the novice right back had proved he is not quite the new Kyle Walker, otherwise Walker-Peters did enough very good things to suggest he has an extremely bright future.

The home bench suffered further disappointment when Harry Kane – rivalling Shelvey in terms of minimal impact on events – was rightly shown a yellow card for catching Florian Lejeune late with a tackle. It left the centre half, newly recruited from Eibar, unable to continue and requiring replacement by Chancel Mbemba as Newcastle’s defence underwent yet another re-vamp.

That unit’s enduring efficiency ensured a slightly soporific ending to a first 45 minutes characterised by unusually abundant sunshine, a cacophony of piercing boos greeting St James’ Park old boy Sissoko’s every touch and the sight of Ashley sitting in the directors’ box. Earlier Sky had released excerpts of a prerecorded interview with Ashley featuring an admission that he had been “naive” in sacking Sam Allardyce so soon after taking over the club and an apology to Chris Hughton for his treatment of Newcastle’s former manager.

If that “sorry” was long overdue, Shelvey owed a very big apology to a lot of people after his idiotic sending off early in the second half. When Dele Alli, down on the turf after being felled by a challenge, pushed the ball away as Shelvey attempted to retrieve it, the Newcastle midfielder responded by stepping down hard on Alli’s ankle, directly in front of referee Andre Marriner.

Marriner cannot have had a more straightforward decision to make all afternoon and duly wasted no time in reaching for his red card. With Lascelles beginning on the bench, Benítez had made Shelvey captain for the afternoon but now the Spaniard deliberately looked away as he trudged off.

Although Gayle did subsequently force Hugo Lloris into a routine save, Newcastle were seriously up against and few were surprised when they fell behind. Like Kane, Alli had endured an uncharacteristically ineffective afternoon but he issued a belated reminder of his talent by registering that opening goal.

It arrived at the end of a hallmark Spurs passing move, concluding with Kane picking out Eriksen whose cross was met by Alli’s left foot and a stretching finish far too good for Elliot after the scorer had darted between Lascelles and Mbemba.

If Alli’s run had been timed to perfection so, too, was that of Ben Davies as Pochettino’s left back, turned up in the box to supply Tottenham’s second goal with a low, six-yard shot following first time passes from Kane and Alli and Eriksen’s deception of the home defence by shaping to shoot himself.

Time remained for Atsu to miss a sitter and Kane to hit a post before having a goal disallowed for offside. His moment will surely come – but Newcastle’s horizon looks somewhat cloudier.