Romelu Lukaku and Manchester United off to a flyer 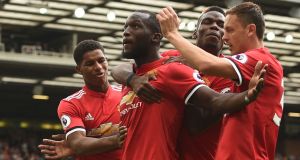 For Manchester United, it is difficult to see how their first game of the new season could have gone much better other than perhaps another goal or two to polish up their superiority. As it was, they shouldn’t be too greedy. Romelu Lukaku has wasted little time demonstrating why he became the club’s most expensive signing over the summer and, on this evidence, it is shaping up to be a season of rich promise for Jose Mourinho’s team.

Lukaku should certainly have dispelled any lingering self-doubt with the two goals that set up this win. Not that the £75m signing displayed even a flicker of stage fright with the left-foot finish and close-range header with which he introduced himself to the Old Trafford crowd.

Lukaku ended a hugely satisfying afternoon waving appreciatively to the Stretford End and he might have finished with the match ball as a souvenir had it not been for a brilliant saving tackle by Pablo Zabaleta, one of three West ham debutants, just after the hour.

Yet this was more than just a story of Lukaku’s two-goal debut and, though the striker deserves the headlines, the form of Marcus Rashford and Paul Pogba should also fill Mourinho with optimism that his team are capable of significant improvement from last season’s sixth-placed finish. Potential champions? You wouldn’t bet your mortgage against it happening.

Henrikh Mkhitaryan also had a fine game and, not for the first time, it felt faintly ludicrous that Chelsea have allowed Nemanja Matic to join one of their title rivals. Matic fitted in seamlessly and the home side were not flattered by that late one-two when the substitute Anthony Martial slotted in the third goal, quickly followed by Pogba knocking another in from 20 yards. It was a tepid show from West Ham and they have now lost 11 opening-day games in the Premier League era, more than any other club.

As the crowd serenaded Mourinho and Joe Hart, West Ham’s new goalkeeper, was reminded that it was a long way down since he was winning championships with Manchester City, it did not seem to matter too much that Victor Lindelof, the home team’s £31m acquisition from Benfica, was not even in the squad because of an unimpressive pre-season. Another manager might have felt duty-bound to play such an expensive player. Mourinho does not operate with those kinds of constraints and Phil Jones was recalled alongside Eric Bailly to make sure Javier Hernández did not enjoy his return to Old Trafford too much.

Hernández scored 37 goals in 103 league games during his days in Manchester and one imagines he would have loved the kind of chances that Lukaku’s team-mates served up for the Belgian. Mkhitaryan’s expertly delivered free-kick for the second goal was the case in point. Rashford’s beautifully weighted pass for the first was another. These are the opportunities Lukaku depends upon and, as long as it continues this way, he should get a bagful this season.

Rashford was also involved in the second goal, having been chopped down by Zabaleta for the free-kick, and curled another shot against the post before Martial took over for the last 10 minutes. These are early days but Mourinho, slowly but surely, seems to be assembling a side without any obvious weaknesses and Matic’s contribution for the first goal was a neat little snapshot of his worth. Matic played with great control and it was his interception, cutting out Pedro Obiang’s pass, that sent Rashford haring away to start the move that led to Lukaku firing in the first goals.

West Ham had defended stoutly until that point but the away team had set about the afternoon with a distinct lack of adventure and there were only fleeting moments when their new-look frontline of Hernández, Marko Arnautovic and André Ayew flickered into life. Arnautovic had their best moment with a looping header that David de Gea tipped over the crossbar but the score was 2-0 at that stage and, for the most part, Slaven Bilic’s men were pinned back into their own half.

Mkhitaryan’s precise pass left Martial with the opportunity to stroke in the third goal and Pogba added the final flourish by beating Hart for the second time in a minute.