Children among injured in violence after Middlesbrough match 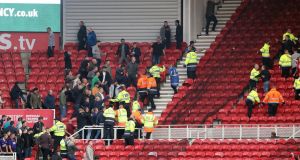 Fans clash in the stands during the Championship match between Middlesbrough and Sheffield United at the Riverside Stadium. Photograph: Owen Humphreys/PA Wire

A police officer has been taken to hospital and children as young as 10 were injured in a brawl after a football match in Middlesbrough on Saturday.

Disorder began just before the final whistle when Sheffield United fans invaded the pitch after their team had a last-minute equaliser disallowed. Violence continued outside the ground, leaving children “terrified”.

Five people have been arrested on suspicion of a number of offences and are in police custody. Cleveland police said they expected to make more arrests as the investigation unfolded.

Assistant chief constable Jason Harwin said: “We will absolutely not tolerate violence of this nature and we will work to identify the offenders and bring them to justice.

“The vast majority of fans accept that football is a family game, watched by children, parents and grandparents. It’s terrifying for children to witness such violence, or be innocently embroiled in it as their parents frantically try to keep them safe. Unfortunately a small minority of people behave in a manner which puts innocent fans at risk,” he said.

Middlesbrough won the game 1-0 with a first-half goal from Rudy Gestede.

The latest British Home Office statistics on football-related arrests showed a 1 per cent increase in the 2015 to 2016 season, the first rise in three years. However, the number of arrests still represented a decrease of 20 per cent since the 2011 to 2012 season – 4.8 arrests per 100,000 attendees.

The data, published in November 2016, showed that of the 1,895 arrests in the 2015-16 season, a quarter were made in connection with Championship matches. It was the first time in five seasons that Premier League matches did not experience the highest proportion of football-related arrests (23 per cent).