Stephen Ward and Burnley fill their boots on glorious away day

Ireland defender: 'It was just a spur of the moment thing . . . thankfully it went in.' 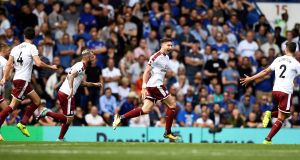 If last year is anything to go by, Burnley may turn out to have secured their entire quota of away wins for the new season on Saturday - and Stephen Ward his quota of goals - but even if the worst happens they’ll have had quite a day to remember.

“For the first game of the season, I don’t think it could have been any tougher than playing away to the current champions,” says the Dubliner, “and to go and get the result that we did is massive for us, especially with how much was made of our away form last year.”

Burnley benefited, Ward admits, from some Chelsea mishaps but they played superbly for spells in their 3-2 win against Antonio Conte’s side while the 31-year-old chipped in with a cracking first half effort that should comfortably make the cut when it comes to those goal of the month selections a few weeks down the road.

“There were a few things that happened in the game that helped us out,” says Ward, with Gary Cahill’s sending off in the first half with the game still scoreless the most obvious. “But we still had to play against a Chelsea team that have so much quality, so we’re delighted. Obviously them going down to 10 men gives you that bit of an advantage but last year we went to City and they had a man sent off early (but still won 2-1).

“I thought we handled it very well (this time),” he says. “Our first half performance was excellent and to go in three goals to the good was fantastic. People can say that we sat back when maybe we shouldn’t have after that but that’s natural really when a team of that quality is looking to get at you. In the end I think we saw it out well and nearly got another one ourselves when Robbie (Brady) hit the post.”

Sam Vokes got two of the three Burnley goals but Ward’s was clearly the pick of the bunch, even if he prefers to play its quality down. Starting with a free out on the left taken by Ward himself, the visitors worked their way forward rather than settling for pumping it towards the box and when Jack Cork played the Irishman in behind N’Golo Kante, the ferocity of the full-back’s finish appeared to catch the hosts by surprise.

“It was still just a spur of the moment thing. I took it short when I could have just lobbed it into the box but I looked up and there just seemed to be a lot of blue shirts in the box so I played it short to Corky and when it came back to me I had a go; thankfully it went in. I don’t get too many like that.”

He might not get another this season, he admits, but if the win paves the way to an improvement in the team’s away form then he’ll he happy, he says. “To win at Stamford Bridge was great but we that picking up points on the road is something that we have to add to our game. We know that there are plenty of tough games to come, though; on our home patch as well.”

With the August friendly internationals now a thing of the past, Ward, who will presumably be named today in Martin O’Neill’s squad for next month’s World Cup qualifiers against Georgia and Serbia is happy to have the opportunity to get some more competitive game time before the Ireland games come around.

“The games coming up in September are huge so it’s nice to some minutes of league football under your belt because you want to be at your best. Hopefully everyone can come in strong and healthy so the manager can have a full squad to choose from and we can give ourselves the best chance possible of pushing on now and qualifying.”