Eoghan Stokes keeps up Bohemians’ run of success against Rovers 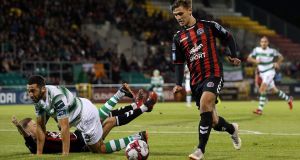 Eoghan Stokes proved their match winner off the bench as Bohemians maintained their Gypsies’ curse over Shamrock Rovers this season.

Substitute Stokes struck a 68th-minute winner at Tallaght Stadium to give Keith Long’s visitors a third win of the campaign over their arch-rivals.

It’s a hat-trick of wins in Dublin 24 for Bohemians stretching back to last season and means Rovers have taken just one point from the four derbies this year.

Loud boos from the Rovers faithful greeted the final whistle as Stephen Bradley’s side slipped four points behind Waterford in the battle for third place.

Though Rovers started brightly, it was Bohemians who edged the first half, being denied a penalty on 17 minutes.

Right winger Daniel Kelly spun past Seán Kavanagh from captain Derek Pender’s pass and certainly appeared to be tripped inside the area by the backtracking Roberto Lopes. Despite appeals, referee Neil Doyle gave a goal kick.

Bohemians then brought the first save of the night from Rovers goalkeeper Alan Mannus just past the half hour.

Kevin Devaney’s floated corner was met by Darragh Leahy at the far post with the left back’s downward header needing to be turned round a post by Mannus low down to his left.

Rovers gradually got on top in a slow burner of a second half to create their first real chance of the game on 61 minutes.

But just when Rovers looked like they’d got a grip of the game, Bohemians struck on the counterattack to score on 68 minutes.

Keith Buckley put Keith Ward through on goal. And though Lopes won the ball off the Bohemians midfielder, it broke for Stokes who skilfully found the net from a very tight angle.