It was ‘year zero’ for Italian football – and then came Ronaldo 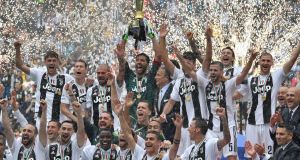 Juventus lifting the trophy following the last Serie A match of the season against Verona on May 19th, 2018, in Turin. Photograph: Getty Images

This was supposed to be a grim summer for Italian football supporters. For the first time in six decades a World Cup was taking place without their national team. As the tournament in Russia got under way, the departing sports minister, Luca Lotti, portrayed the moment as calcio’s “year zero”.

The fans themselves, though, did not seem so troubled by the prospect of a World Cup without the Azzurri. Mediaset recorded a cumulative TV audience of 297 million across the 64 games – 49 million more than the previous rights holders, Rai and Sky, had achieved between them in 2014.

Two-thirds of Italian televisions were tuned into the final on July 15th. That distraction provided Cristiano Ronaldo with the perfect window in which to arrive unmolested at Turin’s Caselle airport and complete a € 100million transfer from Real Madrid to Juventus.

Year Zero? From the moment the Portuguese forward touched down in his private jet this has started to feel more like YeaR7 for Serie A. Media coverage has portrayed Ronaldo not as a footballer but an alien, that aeroplane in fact a UFO bringing him to dazzle Italian audiences with his otherworldly talent.

Such hyperbole was to be expected. Serie A had not witnessed a transfer coup of this magnitude since the arrival of the Brazilian Ronaldo at Internazionale from Barcelona in 2002.

A five-time Ballon d’Or winner? No player from the Italian top flight has even been voted into the top three for that award in more than a decade.

Ronaldo has already made a transformative impact off the pitch. Juve had the most social media interactions of any football club in the world in July. On YouTube alone they recorded 36.25 million views – almost double what they had totalled in the previous six months combined.

For a club whose long-term ambitions rest on improving commercial revenue streams in line with those of the world’s very richest clubs – Juventus lagged some €270 million behind Manchester United and Real Madrid in 2016-17 – this is already a significant development. But will his impact on the pitch be as significant?

“This season we have the ambition to win the Champions League, ” said the manager, Massimiliano Allegri, after the club’s annual intra-squad friendly at Villar Perosa on Sunday. “After two finals lost [over the past four years] we are trying to finally bring it home.”

It is not hard to see how Ronaldo may help them to do so. The European Cup’s all-time leading goalscorer has hit double figures in that competition for seven seasons running. His goals also eliminated Juventus last term and he thwarted them in the 2017 final as well.

But does his arrival threaten to widen the gap between Juventus and their domestic rivals? The Bianconeri have won the past seven Serie A titles, not to mention all four editions of the Coppa Italia since Allegri took charge. How is anyone supposed to get close?

They may not, but it is not a foregone conclusion that Juventus will pick up more points with Ronaldo. No matter how many goals he scores, there simply is not much room to improve on the 95 they piled up last season. Besides, will he even play every game or could he be rested to conserve energy for big European nights, as happened in recent seasons with Madrid?

For those who hope to see Juventus’s domestic hegemony challenged, the real question ought to be whether any rivals are capable of producing similar consistency. Napoli got close last season, amassing a club-record 91 points, but a step back seems probable following the departure of Maurizio Sarri to Chelsea.

To land Carlo Ancelotti as his replacement was impressive, yet even a man who has won domestic titles in Italy, England, Germany and France – not to mention three Champions Leagues – will have a hard time sustaining momentum. This team will need to learn a whole new way of playing, having also lost Jorginho as their midfield conductor.

Instead it is Inter who have been billed as this season’s “anti-Juve” after compelling business in the transfer window. After taking time to instil an identity in his team last season Luciano Spalletti has now been reunited with Radja Nainggolan – a player who thrived under his charge at Roma. Stefan de Vrij and Sime Vrsaljko will bring experience to a defence which had already made great strides, while Lautaro Martínez has thrilled at the other end in pre-season.

A mooted deal to sign Luka Modric looks unlikely to come to fruition, but the fact that Inter dared to dream of such a move – and the player’s apparent interest – feels indicative of change. Whether because of Ronaldo’s arrival or merely as an extension of the trend that brought him to Turin, there is a sense of bullishness among Italy’s leading clubs that has not always been present.

Roma, fresh from a Champions League semi-final, missed out on Malcom, but still added a wealth of intriguing young talent – from Ante Coric through to Justin Kluivert. Eusebio Di Francesco appears to be gearing his team up to play in a more attacking way, with Javier Pastore and Bryan Cristante hardly suggesting caution on either side of midfield in a 4-3-3.

Even Milan, after a turbulent 12 months, look to be emerging stronger. Ronaldo’s arrival directly benefited the Rossoneri, paving the way for them to acquire Gonzalo Higuaín and Mattia Caldara from Juventus. Leonardo Bonucci went the other way but after a disappointing year at San Siro few were sad to see him go. Caldara and Alessio Romagnoli have the potential to mature into Italy’s starting centre-back partnership for years to come.

Even more significant might be the returns of Leonardo and Paolo Maldini to the club in directors’ roles, after Elliott Management took control of the club. The pair’s combined experience can only be a benefit, but there is a symbolic value too for a team who have seemed cut adrift from their more successful past.

Lazio ought to challenge for a top-four spot once again having thus far retained the core of the squad that missed out only on the final day last season. Keeping hold of Sergej Milinkovic-Savic would be a far more important piece of transfer business than anything else they could achieve.

There is plenty more intrigue beyond the frontrunners. Can Parma, having successfully appealed against a five-point deduction for the problematic WhatsApp messages their forward Emanuele Calaiò sent to opponents late last season, stay afloat on their return to the top flight?

What of Empoli, also newly promoted, who scored 88 goals in Serie B? Will a young Fiorentina team continue to thrive under Stefano Pioli? Might Torino push for Europe after quietly dropping close to €50 million in this summer window, adding much-needed reinforcements in defence?

Two games of the opening weekend have been postponed after the Genoa bridge tragedy, but the season will still kick off on Saturday, when Juventus travel to Chievo. Serie A begins with Ronaldo, in other words. It could not have been any other way.