Riot in Ringsend: How Shels and Bohs played a part in the 1913 Lockout

From The Back Pages: Scenes of violence marred the opening of Shelbourne Park 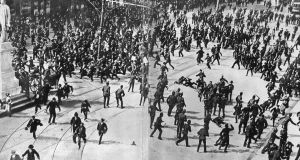 Rioting outside the Liberty Hall headquarters of the Transport Workers Union in Dublin on the day after Shels played Bohs in Ringsend. Photo: Evening Standard/Hulton Archive/Getty Images

It was around lunchtime on Saturday August 30th 1913 and the Bohemians team were preparing to travel south to face Shelbourne in a charity match to mark the opening of Shelbourne Park in Ringsend. This was due to be a celebratory occasion with the biggest club on the northside meeting the biggest club on the southside before the 1913/14 season kicked off but, in truth, it would be anything but that.

Dublin city was, to quote Captain Boyle in the famous Dublin play Juno and the Paycock, in “a state o’ chassis.” Since the previous Tuesday the Irish Transport and General Workers’ Union had called a strike on the Dublin United Tramway Company, owned by William Martin Murphy. Rioting had already broken out between police and strikers and there had been large public demonstrations, mainly led by trade union leader James Larkin.

How it came to involve football – then very much the game of the working classes in Dublin with Shels and Bohs the two biggest working class teams – is down to Larkin himself.

In the days previous Larkin’s newspaper and central organ of the trade union movement, The Irish Worker, had declared that both teams had a “scab” in their ranks – Jack Lowry for Shels and Jack Millar for Bohs. Some accounts of the story claim that both alleged “scabs” were Bohs players and indeed in the Shels lineup printed in the following week’s Weekly Irish Times there is no Lowry in the team. However, the exact details of who played for who didn’t exactly matter at the time with the main point being that this was an opportunity for protestors to publicly vent their fury.

In his newspaper Larkin called on strikers to go to Ringsend on Saturday and “stop the match from happening”. He echoed this sentiment in a speech on the Friday evening before the game when he said “There are ‘scabs ‘ in one of the teams, and you will not be there except as pickets!” He also said that, if any of the strikers went to the match, a photograph of them would be taken and they would be reported to their respective trade societies.

The opening of Shelbourne Park should have been a momentous and joyous occasion for football in Ireland. The plan was for the two biggest clubs to entertain a healthy crowd and mark the start of the new season. Seven years previous Shels had become the first southern team to win the Irish Cup which led to wild celebrations across Ringsend, captured in the Evening Herald. “Tar Barrels and bonfires were blazing across Ringsend and Sandymount that night as the Irish Cup was paraded around the district,” the newspaper reported.

Two years later it was Bohs’ turn to win the biggest trophy in domestic football at the time. In 1913 the two teams were preparing for a new season in the Irish League where they would again be the only two teams from the south coming up against six northern sides – Glentoran, Linfield, Belfast Celtic, Distillery, Glenavon and Cliftonville. As The Weekly Irish Times proclaimed a fortnight before, the match at Shelbourne Park would ease the football supporters of Dublin into the new season and give them an opportunity to see some exciting new professional players who Shels had brought over from such exotic locations as Scotland and England.

“The Shelbourne Committee, mindful of the fact that the possession of even the most up-to-date enclosure is not the most important factor in the success of a football club, have got together a splendid team for the pending campaign. Several well-known English and Scottish players – not old crocks this time – men who have big reputations, and are capable of enhancing those reputations, have been signed on and the prospects of the club were never brighter than at present. We wish the club every success in their new venture. Indeed, we are convinced that is marks a new epoch in the history of Dublin football.”

What transpired was very different indeed.

The Bohs team, according to The Weekly Irish Times, “pluckily drove to the scene of the match on outside cars through a hostile crowd of roughs and were assailed with coarse epithets.”

For a few hours already a crowd of about 100 people had been picketing outside the ground but, with 6,000 fans attending the game, “the hooting of the hostile crowd only provoked laughter and derision,” according to reports.

But it was about to get a whole lot uglier. Very quickly the crowd of protestors swelled to between 500 and 600, “reinforced by a horde of hooligans from other parts of the city, and engaged in a wild attack on anybody and everybody who did not agree with them as to the doings of the Larkin gang.”

Trams carrying supporters to the match were attacked after an attempt to storm the gates had failed. A tram conductor was knocked down in the ensuing scuffle and in total over 50 people were treated at hospital for injuries with 16 arrests made. The trouble only stopped when “one of the passengers jumped from the tram, produced a revolver, and effectively dispersed the crowd.”

At this stage the police had waded in with batons to disperse – and strike – the protestors which only made the violence worse.

“In a flash, the RIC men were romping and revelling in a ding-dong fight with the big crowd, who made a big mistake in thinking they could gobble up the policemen,” The Irish Times reported.

In an editorial the following week the actions of the policement were strongly defended. “It is natural in Irishmen to want to see a fight. We think that it is quite possible that some of the police, harassed and wearied by the constant fighting, lost their heads, and did things which they would not have done in cold blood.”

As the rioters were pushed further away from the ground one particularly brazen (or perhaps drunk) protestor managed to pull a policeman’s sword from its scabbard and thrust it between the legs of a police horse, bringing down the horse and rider. Violence would continue in Ringsend for much of the day until, according to The Irish Times, the pubs were forcibly closed around 10.30pm and tensions settled.

Inside Shels’ new ground the charity match was being played while the area outside the ground resembled something of a war zone. According to a report in The Irish Times the following week “the match was splendidly contested and resulted in a draw. The visitors played fine football in the first half and deserved their clear goal lead at the interval but they failed to stick the pace and the boot was on the other foot in the second period, during which Shelbourne, whose new players did not show football out of the common, had most of the play and were good value for the draw of one goal each.”

While the football itself may have been of a high standard the atmosphere was extremely tense with some reports claiming that protestors managed to gain entry to the ground by climbing over a wall to hurl abuse at the players. Some reports also claim that the match didn’t last the full 90 minutes and was instead stopped early as a precaution and to allow spectators get out of the ground safely.

It was an ugly start to life for the new Shelbourne Park with the following week’s Irish Times editorial proclaiming that “the last bill which the city has paid for the strike organisers is the heaviest of all. As we read the reports of the rioting we must all blush for Dublin.”

Indeed Shels and Bohs were both nearly thrown out of the league ahead of the upcoming season in the wake of the match, although it had nothing to do with the violence. Instead the two teams were found to have breached regulations for fielding professional players during the close season. However, at a meeting of the Irish Football Council it was decided that both sides would be reinstated but that the professional players would have to sign new contracts as their previous one had been nullified.

But it was events outside the ground that would have the biggest impact on Dublin society. The violence continued into the night in the city centre and would lead to ‘Bloody Sunday’ the following day when Larkin’s arrest at the Imperial Hotel resulted in the most severe riots yet which left over 400 injured and one dead. Dublin was in a state of turmoil and every facet of society – including football – was feeling the effects.