Can the man from Fray Bentos beef up Arsenal’s midfield? 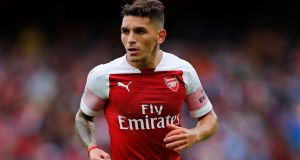 Lucas Torreira: His home town in Uruguay is best known for its corned beef, but that could change if manager Unai Emery’s gamble pays off. Photograph: Eddie Keogh/Reuters

Time for Torreira. That is the motto Arsenal chose to accompany all their messaging about the most pivotal of the five new recruits they have welcomed to try to help Unai Emery rework the shape of the team. Arguably, time for Torreira is long overdue in the sense that Arsenal have missed the kind of characteristics he possesses for aeons.

It feels like a long time since Arsenal went to Chelsea armed with a midfield ready to compete seriously in that department. Once upon a time they used to approach this fixture with a feeling of superiority that came from years unbeaten at Stamford Bridge. A look at the line-up towards the end of that era spells out why they felt able to walk so tall. A central midfield built around the muscular Patrick Vieira, Gilberto and Edu – all athletes over 6ft tall who were as comfortable protecting the back four as projecting the game forwards – was a formidable obstacle for any team trying to make inroads of their own.

Lucas Torreira does not obviously come from that lineage. One of the smallest players in the Premier League – he is the same size as the much-loved little marvel Santi Cazorla – he is more in the mould of intelligent screening midfielders Chelsea have specialised in, initially with Claude Makélélé and currently with N’Golo Kanté. Torreira has a similar mix of instinctive know-how to quickly get into the right places to intercept danger, with an accuracy of pass as the cherry on top.

Arsenal’s great play-out-from-the-back debate has a greater chance of working with the arrival of a player who can receive the ball close to goal and is very efficient in small spaces. Torreira has that natural awareness of where to be and where others are to build the game more securely from the back.

Emery has spoken of his “bright talent” and Torreira is ready to make his full debut at Stamford Bridge. “He is okay every day and is training well,” adds the coach. “He is now with the team, is learning English conversation with us and can understand all the things we want to do tactically on the pitch. I want to continue with him improving.”

Torreira is expected to bring an injection of resilience. During the World Cup, in one of his most authoritative performances for Uruguay against Portugal, he actually made a clearance while the ball was rolling along the floor by jutting out his head while he was horizontal on the turf.

The image seemed to encapsulate a dedication to the cause, an almost crazy bravery to stick his head among the boots, that was the opposite of the stereotype contemporary Arsenal midfielder who might be expected to back off or turn away or not even notice danger.

In addition to the elements of his game that resemble a baseline player, he also naturally crafts a range of passes from the back because of his footballing education as a more creative playmaker. In his encouraging cameo against Manchester City he made a couple of important contributions, and it was telling that he produced one of the few raking passes to find Pierre-Emerick Aubameyang. The striker was offside, but it was a rare moment when Arsenal looked suddenly decisive and imaginative.

If Torreira is able to control the reins at the base of midfield, that may allow Arsenal to be braver going forward

The selection decisions that Emery makes for this game are intriguing in terms of the messages he sends out to his squad. A number of the established usual suspects were notably underwhelming last Sunday. Granit Xhaka and Henrikh Mkhitaryan could not seem to get any kind of foothold, while Mesut Özil and Aaron Ramsey looked out of sorts in unfamiliar positions – Özil very deep and Ramsey pushed high.

So does Emery give them another chance or shake things up? As well as Torreira’s strong case to start, Mattéo Guendouzi deserves to remain in the conversation after his debut, and Danny Welbeck is also fit and could be used as one of the wide players – a player more naturally suited to pressing and engaging in physical work up and down the flanks. It will be interesting to see whether Emery feels it a safer bet in terms of his budding relationships with his players to favour the hierarchy of experience, or whether he has no qualms about giving out chances on merit.

Emery admits he is seeking the right balance in the team, and not only from a defensive point of view. If Torreira is able to control the reins at the base of midfield, that may allow Arsenal to be braver going forward, able to pick their two main strikers, rather than starting with one and having the other as an option to come on.

This is a challenging opportunity for Torreira to show his worth against a midfield of Kanté and Chelsea’s new signing Jorginho. It is a big chance for a little guy who Arsenal hope will turn out to be the most successful export from the Uruguayan town of Fray Bentos since corned beef.