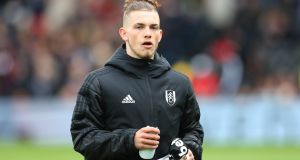 Liverpool have completed the signing of 16-year-old winger Harvey Elliott from Fulham.

Elliott made his debut in the 3-1 EFL Cup win over Millwall in September at 15 before going on to become the youngest debutant in Premier League history when he played against Wolves in May at the age of 16 years and 30 days.

He also featured against Newcastle for the Cottagers and the England youth international is in the squad for Sunday’s friendly with Napoli in Edinburgh.