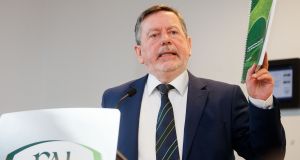 Donal Conway: by April 15th he was sitting across a table from his long-time friend at an airport hotel, attempting to negotiate the first stage of Delaney’s exit from the organisation. Photograph: Tommy Dickson/Inpho 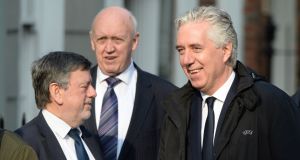 If there is one thing everyone seems agreed upon ahead of this weekend’s FAI AGM in Trim it is that the current crisis at the association has been the making of its president, Donal Conway. The pity, most go on to conclude, is that he had such a central role in the making of the crisis.

Many wonder about opportunities he must have had during the 14 years he has been on the FAI board to stand up and make his mark. A couple, without much conviction, give him a pass on the basis of his own explanation that he did not know the full extent of what was going on in Abbotstown.

Most dismiss that notion, however, and argue that he knew more than enough to prompt some action if he had not been so keen, first and foremost, to preserve his own position.

“He was a ‘yes’ man,” suggests one observer. “Although they all were, to be fair to him.” However, some strongly contend that he is more culpable for the current state of the association than that.

His turning point, in any case, only seems to have come somewhere between March 23rd and April 10th. On that first date, a Saturday, Ireland narrowly beat Gibraltar away, but the football was overshadowed before and during the game itself by the turmoil within the official party and speculation among the press that John Delaney was about to depart.

Afterwards, the match was pretty much consigned to footnote status by a press release in which it was announced that the board had unanimously endorsed the creation of a new position, executive vice president, for their chief executive.

Setting aside the fact that he and the rest of the board were, as we now know, announcing the implementation of a review suggested by Delaney, conducted by someone he had picked and written entirely for his benefit, there are 423 words of quotes from Conway in the statement. Many of them amount to praise of the 51 year-old, which must make for difficult reading when he looks back now.

At least the one – “He transformed the way we operate as an Association” – still holds up. Delaney did that alright.

A couple of weeks later, the tone had changed as Conway was left hanging in front of an Oireachtas Committee by Delaney’s decision to hide behind legal advice. When politicians asked who had signed off a press release containing the suggestion, entirely false as it turned out, that the board had been kept full informed of developments regarding the €100,000 cheque written by the chief executive to the association, the president can be seen quietly putting it to Delaney that it had been him.

Things had finally changed at the association’s top table.

Donal – or Daniel, as company records suggest he was actually christened – Conway grew up in Offaly then Charleville in Cork in what he has described as a pretty traditional GAA family. His father was employed in the agricultural sector and his work prompted the move south but it was an uncle, Sean, that fuelled his early love of association football after returning home from a spell in London.

Having earned degrees in economics then Maths, he became a teacher and recalls early efforts at promoting the game in a boys’ school on the southside of Dublin where he met resistance due to the emphasis placed on rugby.

He ultimately settled on the northside, living in Swords, with his wife Patricia and daughter Sarah and got a job a girls’ school, Our Lady of Mercy, in Beaumont where he would eventually become principal. There, he coached teams and took on some responsibility for the admin side of things before starting to get involved in the Leinster branch of the FAIS, the governing body of schools football in Ireland.

By the mid 1990s he was gaining some prominence on the scene. He was not universally liked then or now but even those who didn’t take to him recognise why he is generally well regarded, describing him as affable and articulate. There is a suggestion that self advancement was a motive but that would not be so uncommon in what was then, as now, a pretty cut-throat environment.

He is remembered as politically astute and hard working; with some suggesting that as chair of FAIS’s Leinster branch, he resisted a rewriting of the constitution intended to grant more power to the regions then, when it was passed anyway, worked hard to see it implemented.

He made it onto the FAI’s council and was prominent enough by 2002 to have had a hand in the Genesis report. By 2005 he was on the board but had next to no impact according to those who had been around a while.

“He was typical of the day in FAI officialdom,” says one. “Get on the ladder, then wait your turn.

His time would take quite a while to come. For seven years or so, Conway was regarded as a diligent enough worker who drove a couple of the more productive committees and showed an active interest in issues like child protection, girls’ football and player development. He doesn’t seem to have done much to mark himself out as either a particular talent or a threat within a circle that was completely dominated by Delaney and his right hand man, Michael Cody.

The latter served as an adviser to Delaney and as a sort of enforcer, reminding those who might stray where their loyalties should lie. He was widely disliked.

By 2012, though, Cody, already in his 70s, was getting on a bit and there is a perception that as he put a little less energy into the politics of the association, Conway began to fill the space vacated.

A sociable sort (he and fellow board member, Paraic Treanor, would appear at sponsors’ drinks at away games when reporters would also be present, the pair and their families also holidayed together) he was one of those who is said to have most regularly gone for pints after games or meetings with Delaney and was gradually seen to take a more central role.

He was elected president in 2018 but the deal that led to that would have been in place long before that summer. By then, he was widely regarded as a close confidante of the chief executive.

None of those with a knowledge of what went on at the time who spoke to The Irish Times give much of a pass to any of the board members. All, they insist, must have known about many of the issues that became talking points within the association’s staff and game’s more prominent volunteers, some of which was reported on in the media.

And the high turnover of senior staff, many of whom are said to have been blamed by Delaney for the poor financial situation or other issues, would have been entirely apparent. The kindest thing anyone seems able to muster is a bit of empathy.

There is a strong sense, though, that while a great deal might have passed his predecessor, Tony Fitzgerald, by, Conway was at the heart of things and had to have known precisely what he was doing as he toed the line on, among other things, pay and pension cuts for rank and file staff but huge contract extensions for Delaney whose behaviour he never seems to have formally called into question.

As president, it is pointed out, he was also chairman of the company but did little or nothing that has come to light to champion real change. According to board minutes from the spring, reported on in the Sunday Times last week, he was still expressing support for Delaney even after several other directors had seen the writing on the wall and started to question their own loyalty to him.

At some point in the weeks that followed, he too finally saw the light and by April 15th he was sitting across a table from his long-time friend at an airport hotel, attempting to negotiate the first stage of Delaney’s exit from the organisation and having to grapple with the implications of financial demands that the board’s previous support for him had done so much to fuel.

A couple of months on and his motives continue to be questioned, not least by the Minister for Sport, Shane Ross. There are those who still suspect he is up to something, although the most obvious explanation for his determination to stick around is a desire on his part to salvage his reputation and be remembered as the president who started to fix things rather than one of 10 directors who helped to break them so badly.

He is praised for his eagerness since to engage with others and the work he has put into championing the reform process, an effort acknowledged even by those who still see the process itself as flawed. And the margin in last weekend’s vote (116 to 2) is regarded as firm evidence of his popularity amongst the grassroots.

He makes little enough attempt to hide his hurt over his presidency being cut short even to two years, from what would have been four, something others who have given up large portions of their lives to the game say they understand given how important such recognition can seem. The sympathy runs out pretty quickly, though.

“He sat on his arse in there for 15 years,” says one long-time observer. “He should be out on it now.”