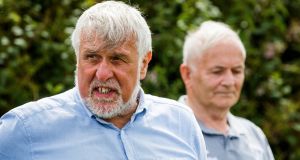 After an era in which about the only thing in doubt at an FAI agm was the winner of the press sweepstake on how many times John Delaney would appear in the video highlights of the association’s week-long “festival of football”, there is hope, at least, that Saturday’s event in Trim might prove to be an important staging point on the road to some new and brighter future.

Unfortunately, though, there is an alternative “Armageddon” scenario too; one involving delegates electing three members of the old board back on to the new one, Minister for Sport Shane Ross reacting with characteristic finesse and Fifa declaring war.

It could, in short, be more eventful, than we’ve been used to.

At issue is whether Noel Fitzroy is re-elected as vice president in the face of competition from Gerry McAnaney of the Armed Forces and Waterford’s Paul Cooke at the same time as John Earley is returned to the board by his schoolboy football supporters.

A seat is there for the taking by Earley, it seems, but there is a suggestion that he would prefer to know Fitzroy’s fate before confirming he will be back. With Donal Conway sure to prevail in a plebiscite on his presidency, the return of both others would send a powerful message to the Minister, more powerful than one sent by the recent return of FAI general manager Noel Mooney, which was itself characterised as a “f**k you” by one representative of an affiliate when speaking to The Irish Times over the past week.

A repeat would doubtless be viewed as another provocation by Ross although quite how he would he react is another thing when the presence of both Fifa and Uefa in Trim is clearly intended to send him a clear warning about the association’s independence.

Opinion was divided on Friday over whether Fitzroy would win. Both McAnaney and Cooke are well regarded veterans of council with strong track records to point to, one stressing his emphasis on good governance, the other offering expertise on the financial front. A cynic might suggest that victory for either might spare the president an awful lot of extra unwanted grief.

Elsewhere, John Finnegan, of the Munster Football Association, and David Moran, of the Leinster Senior League, look set to take the two amateur game’s seats. Moran and his league made headlines when they broke ranks and criticised the association’s leadership at a time when a campaign of supportive public statements was being orchestrated from Abbotstown.

And in the other constituency, semi-formally titled “others” as it happens, Joe O’Brien of the colleges is considered a slight favourite to beat PFAI solicitor Stuart Gilhooley, although the union remains hopeful. McAnaney is a candidate here too but may withdraw.

It should all be interesting as should the manoeuvring that follows with the various winners in a better position to shape who gets what on the many new committees, most obviously the football management one.

Despite all the talk of a new transparency, most of the votes will be done behind closed doors and the agm will have to be adjourned at some point back to autumn by which time the accounts should be done. Delegates are expected to be allowed ask questions in the meantime but with some inquiries ongoing, the big answers are, it seems, still months away.