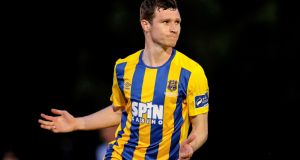 Dean Walsh proved an inspired substitution for Waterford with a stunning late winner to leave UCD adrift at the foot of the table.

Liam Kerrigan had capped an impressive debut with a cracking equaliser to look to have got UCD back on survival track, only for Walsh to win it for the Blues on 85 minutes.

Meeting John Kavanagh’s diagonal ball from the right, Walsh hit a first time left-foot volley that arrowed into the bottom corner to mark a first win in six games for Waterford.

Back after a two-month absence following under-21 duty and injury, Zack Elbouzedi lit up the game with Waterford’s lead goal seven minutes in, cutting past several defenders before finding the bottom corner with a crisp right-foot drive.

Despite going behind, UCD enjoyed a good bout of pressure, forcing several corners before the lively Kerrigan brought a save at full stretch from Matt Connor on 25 minutes with a shot from distance.

Waterford had Connor to thank for another good stop 11 minutes into the second half as the goalkeeper got down smartly to parry a shot from UCD skipper Paul Doyle.

But Connor was finally beaten on 68 minutes when Doyle slid a pass through for Kerrigan who cut inside to drill a low drive to the far corner.

Battling Finn Harps recorded only their third ever home league win over arch-rivals Derry City in the north-west derby at Finn Park.

This result moves Harps three points clear of bottom club UCD while City stay fourth and have lost ground in their bid for a European spot.

Derry had the better of the first half with Gerardo Bruna, Jamie McDonagh and Junior Ogedi-Uzokwe having chances.

Harps, who notched up their first away win of the season in Waterford last week, had only one real opening before the break.

Raffaele Cretaro, who was captain on the night in recognition of making his 500th League of Ireland appearance, floated in a free that was met at the far post by Keith Cowan whose header hit the side-netting.

McDonagh spurned a chance to put City ahead before Harps took the lead on 65 minutes when substitute Tony McNamee’s long throw-in was met by Australian Harry Ascroft who headed past Peter Cherrie for his first goal of the season.

City piled on the pressure but Harps held on for victory.