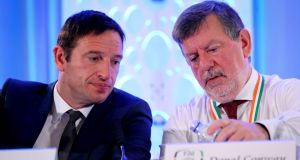 Donal Conway has said that he available at any time to discuss the future of the FAI with Minister for Transport, Tourism and Sport after the 65-year-old’s re-election as president and the return to the association’s board of former member John Earley puts the organisation at odds with Shane Ross again.

Conway, who was returned with just five votes against and one abstention at the association’s agm in Trim where 140 were entitled to cast ballots, said Ross had met on Friday with representatives of Uefa and Fifa, Thierry Favre and Sara Solemale respectively, who had outlined to him how the two federations view the issue of government interference in national associations.

Ross, he said, had maintained his previous position, which had included the view that all of the previous board should depart.

“I wasn’t there,” said Conway after the agm had ended, “but I got a report, and Uefa and Fifa reinforced their situation that choices about who leads the executive team or the officer board would be matters for the member association. Minister Ross stuck to the position he has adopted over the last number of weeks.

“I’m sure Minister Ross and Donal Conway want to get to the same place, a governing body for sport with governance of the highest standard,” continued the former schoolteacher. “There may still be some disagreement on how best to effect that but the FAI are willing to talk to Mr Ross at any stage about how best to move forward.”

Conway expressed sympathy for Noel Fitzroy who had earlier given up on his attempt to be re-elected vice president on the basis that, with Earley’s set to return, success would have meant taking the number of directors from the old board on the new one to three, more than the number allowed for by the Governance Review Group report.

“It [the report] recommends one or a maximum of two board members going forward or transitioning; when those conditions changed, we had to address it,” said Conroy. “So we’ve been talking about this for a number of days.

“I talked to Noel over last 24 hours, and he had assured me he would do the right thing. But it was a difficult situation for him and I was conscious of that. I’m quite close to Noel, president and vice-president aside, so final confirmation – though I knew it would have been a real possibility – was this morning.”

He declined to say whether he had sought to talk Earley, who had resigned from the board in the days before the Governance Group report was published in protest over its contents, out of running, given that it made for a very difficult situation and potentially a major confrontation with the Minister Ross.

“I spoke to John in the main last Saturday about the EGM and the Schoolboys supporting the reform,” he said. “That was the greater part of any engagement I had with John.”

At the meeting he called on delegates to ensure that Fitzroy was given a “considerable and significant role in football going forward” but he insisted afterwards that he was not in any position to guarantee to Fitzroy that his would happen.

The process to fill the remaining four independent positions, most if not all of whom are now likely to be women given the failure of the meeting to elect even one, will begin next week and that all should be in place within a couple of months.