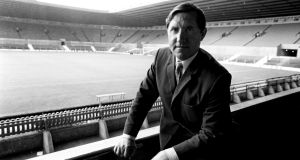 Former Manchester United manager Frank O’Farrell at Old Trafford after he had been appointed for what would ultimately be a doomed spell in charge. Photo: Peter Robinson/EMPICS via Getty Images

It was in 1998 that Ireland were crowned European champions at both under-16 and under-18 levels in what was an unprecedented feat. Brian Kerr and assistant Noel O’Reilly were the management team behind Ireland’s underage history-makers and this documentary focuses on the journey with Kerr at its centre. Robbie Keane, Damien Duff, John O’Shea and Richard Dunne were among those players involved and they all speak in this documentary which only raises the question again and again of why Kerr is not involved in Irish football.

Where to watch: Vimeo.

Frank O’Farrell: The Shadow of Busby

Only one Irishman has ever managed Manchester United and he did so at perhaps one of the most difficult times. Frank O’Farrell from Cork took over at Old Trafford in 1971, three years after United had lifted the European Cup and in direct succession to the one and only Matt Busby. And, as it transpired, it was Busby who would be the greatest obstacle for O’Farrell with the Scot “moving upstairs” to a director’s role but still overseeing much of the first team business. Paddy Crerand, Alex Stepney and Eamon Dunphy are among those who contribute.

In My Book You Should Be Ahead

This is a real gem of a find on YouTube. It comes from 1975 and charts a week in the life of Shelbourne Football Club as they prepare for the FAI Cup final against Home Farm. At the time Shels were at a particularly low ebb. Without a league title since 1962, the board face problems in low attendances with most of the competition at the time coming from “the best picture in town”. It’s interesting to see that the same problems which still plague League of Ireland clubs now were as pertinent in 1975, and throughout the documentary there are plenty of parallels with the modern day.

It’s a mark of how pertinent the issue focused on in this documentary is that, three years after it was first broadcast, there still isn’t a top-level footballer in England to have come out as gay. Stephen Byrne looks at why that is the case and what the issues would be if a player did publicly announce their homosexuality. He speaks to Graeme Le Saux about the abuse he received during his career due to the perception that he was gay while Alan Pardew features heavily, saying he is sure he has managed gay players but they feel they cannot come out publicly.

Where to watch: RTÉ Player.

If nostalgia is your thing then look no further. The period in Irish football when Jack Charlton managed the national team was as successful as this country has ever known and this documentary charts those 10 years with input from the likes of Ray Houghton, Andy Townsend and Paul McGrath. Charlton’s philosophies are also questioned in the documentary, no more so than by Eamon Dunphy who features prominently. And to top off a thoroughly enjoyable hour or so of viewing, it’s narrated by Colm Meaney.