Manager welcomes James McCarthy’s expected move to Palace, so long as he is playing 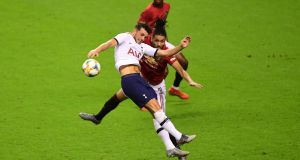 Ireland player Troy Parrott in action for for his club Tottenham Hotspur, as they take on Manchester United in the International Champions Cup at the Shanghai Hongkou Stadium in Shanghai, China, on Thursday. Photograph: Di Yin/Getty Images

Mick McCarthy has said that a fresh start for James McCarthy at Crystal Palace would be welcome from his point of view but stressed that his first priority is for the players available to him to be playing, whether that is in the Premier League or not.

“He has done the pre-season and I think he is waiting to get his move and so am I,” said the Republic of Ireland manager who said he has had an exchange of text messages with the Everton player about how things are shaping up for him over the summer. “You all probably know that there are some stories that he might be moving to Crystal Palace . . . sooner rather than later, for him, for me; so he should be in a place to get a game for the first game of the season.

“I’d like to see him playing in September [and] it doesn’t matter, he can go and sign for whoever he wants. He can sign for Oxford and if he’s in the team he has a better chance than if he’s on the bench at Crystal Palace.

Palace have been reported as having made a bid worth almost €9 million for the 28-year-old who has barely featured for the Goodison Park club since returning from serious injury midway through last season.

McCarthy said he was thrilled for Callum Robinson following his €6.7 million move from Preston to Sheffield United and predicted that the 24-year-old could make an immediate impact on the top flight while improving significantly over the longer term but, he maintained, the most important thing from his perspective is that the player actually plays.

“He’s got the pace and power to cope with the Premier League,” he said. “And he is a great personality . . . if he takes that smile and enjoys it all as much as he did when he was here with us he’ll be a real asset for Sheffield United. I’m delighted for him. I think he has a goal in him as well.”

He will, he predicted, improve “bundles”.

“So I’m delighted he got his move but then I don’t want players at Premier League clubs, I want players playing at football clubs, preferably in the Premier League. Suddenly, I’ve got Didsy [David McGoldrick] and him now [and they are] playing two strikers.” Billy Sharp would look to be a likely starter and there is other competition but, remarks McCarthy, “Chris [Wilder] might surprise us all, play 3-4-3 or something, he’ll do something, and let’s hope that they will all play.

After his move from Bolton, Luca Connell, he feels, might still be a year or so away from regular first-team football with Celtic although he revealed that Damien Duff had phoned as part of the club’s “due diligence”, and that he told the Dubliner, ‘I’d take him all day long, having seen what I’ve seen of him’. “I gave him a ringing endorsement.”

He will, he says, take Troy Parrott’s continued involvement in the first team at Tottenham over the coming weeks as representing something similar from the club’s manager, Mauricio Pochettino, with the 17-year-old, who started the International Champions Cup game against Manchester United on Thursday, certain of at least a call up if he is still featuring at club level on and beyond the first day of the campaign proper.

“If he is playing in the first game of the season,” he said, “if he is starting and playing for Spurs, he’ll have to be a shoo-in for the squad”.

“If he is in the squad with Spurs with a chance of coming on, Mauricio Pochettino has proved to be a great coach, so I’m not going to be daft enough to suggest he isn’t good enough to come and play. But he’s got to be playing really.

“I’ve never been that bothered [about age] if they are good enough. Robbie played at an early age, I remember playing all those players when they were young, but I did have a lot more leeway back then.

“I’ve got no leeway now with the Switzerland game. We need to get points on the board. I need to see who is fit and who is playing.”

Asked if perhaps the friendly that follows a few days later in September against Bulgaria might provide a more obvious opportunity to see how the youngster might cope on the senior international stage, McCarthy made it clear that that game, useful as it might somehow prove for the side’s longer-term development, is some way down his agenda.

“A friendly is a friendly,” he said. “I have some ideas on that but my concern is Switzerland but if Troy Parrott is in and around the [Spurs] first team he has every chance of being involved in that, for sure. If he is playing in the Tottenham team I’ll use him for the first-team squad.”