Covering all the bases: Corporate tickets made up almost half of stadium in Madrid 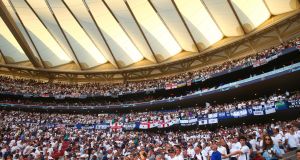 Seeing your team play in a European final is a privilege only few experience.

Those Tottenham and Liverpool fans in the Wanda Metropolitano on Saturday night were the lucky ones who managed to get their hands on tickets.

Thousands more packed the bars and cafés of Madrid, unable to get tickets through all of the various different avenues as dwindling allocations and rising prices push big football matches further away from regular fans.

Inside Atletico Madrid’s stadium there were 63,272 people of which just 60 per cent were fans who had either purchased tickets through their respective clubs or had struck lucky in the Uefa ballot back in April. The other 40 per cent were members of the Uefa ‘Football Family’ – a group which includes the local organising committee, Uefa and national associations, commercial partners and broadcasters.

Of that 60 per cent, 16,613 tickets went to each of the clubs while a further 4,000 went on general sale on the Uefa website in April through a hugely oversubscribed ballot. This represents a trend which has seen allocations become smaller and smaller over the years for the Champions League final as more tickets are taken up by Uefa.

Indeed if you go back to the last time Liverpool won the Champions League – in Istanbul in 2005 – 79 per cent of the stadium was made up of fans who had got tickets through their clubs or the Uefa ballot. For the last all-English final – between Manchester United and Chelsea in Moscow in 2008 – that number was 76 per cent. Since then the number has continued to decrease and hasn’t been above 70 per cent since 2011.

“Uefa are getting more and more senior sponsors and they’re demanding more tickets. They’ll say ‘if you want us to stick X million into the game this year then we want to entertain more of our clients at the final,’” says Kieran Maguire who lectures at the University of Liverpool and runs priceoffootball.com.

Maguire researches and writes about the economics of football and he believes that this is a trend which is only going to continue.

“Uefa know that their bread’s buttered if they give more tickets to the likes of Gazprom and Ford who are the major sponsors. In the past they may have wanted to give more in the ballot as well because on a few occasions they’ve had their fingers burnt when one of the finalists hasn’t been one of the elite teams.”

The difficulty for fans in getting tickets also only increases the number floating around the black market. In a square in Madrid on Saturday afternoon one Liverpool fan sold his ticket for €10,000 while even the touts around the city were offering €4,000, confident that they would then make a profit by reselling them.

And while allocations get smaller, face value prices continue to rise. Category one seats for Saturday’s match cost €600 – a €150 increase on the same ticket for last year.

Back in 2005 there were seven categories with prices starting from €20 and rising to €150. While category four tickets have remained at €70 since 2012 (dropping from €90 in 2011), just 20 per cent of tickets for Saturday night were available at that price with over half costing €180 in category three, another 20 per cent setting you back €450 and the remaining five per cent priced at €600.

Throw in the fact that flights to Madrid increased by around 840 per cent after the semi-finals had taken place while numerous accommodation bookings were cancelled and resold at five or 10 times the price and you’re looking at a very expensive trip.

Martin Cloake and Katrina Law are the co-chairs of the Tottenham Hotspur Supporters Trust, one of the many supporters groups which lobby on issues such as ticket pricing and allocations.

“At an international level we work with Football Supporters Europe and they have direct dialogue with Uefa in the way we would with the Premier League,” says Law.

“Uefa won’t talk to other individual fan groups but we’re making our case very well known to Uefa. What’s come from the Champions League final and the Europa League final having four very organised fan groups involved is that we’ve given this a kickstart now.”

Earlier in the competition both Manchester United and Liverpool subsidised ticket prices for their fans on trips to Paris and Barcelona after the host clubs had priced visiting tickets at just under €120.

That led Uefa to announce in March that they are looking into capping away ticket prices for next year’s Champions League but there has been no word since on whether that will in fact come into effect.

“Some of the signals that we’re getting is that there is an awareness within Uefa that this whole issue of ticket pricing needs to be looked at,” says Cloake.

“We’re also looking at having conversations with some of the sponsors. A lot of the rhetoric around these finals is that they’re all about the fans and the fans create a great atmosphere and I don’t think any of us are saying not to have sponsors because the reality is that football needs sponsorship money.

“But we’re saying do you actually need to take as many tickets as you’re taking out of the game if you’re saying that you’re actually interested in the fans. If you want to push your brands then you’re not making yourself very popular by effectively taking tickets from fans.

“Football has been priced out of somebody who maybe hasn’t got a lot of money in their pocket but a lot of people who travel are not necessarily well off people. They’re spending more of their disposable income than they should be and some are getting into real debt because of it.”

And even after spending a small fortune to follow a team around Europe the treatment away fans receive is often less than pleasant, to put it mildly. Even at a game as big as the Champions League final on Saturday, Cloake and Law say there were huge deficiencies in terms of facilities and general treatment.

“The metro station that we were advised to go to was a 25-minute walk from the ground on a hot day,” says Cloake.

“Uefa had said there would be water stations but there were no water stations. There was so signage and no stewards. At the stadium itself it was absolutely intense heat. Once we got past first security we were into a fan zone where you queue to go through the turnstiles.

“There was no shade in that area at all, people were fainting, there was no free water being provided. Even in the ground water was being sold at €5 a bottle and that ran out quickly. Regulations say there is supposed to be free tap water provided but there was none. So all of those things add up and the glamorous experience that we see on the TV is not what’s being experienced by those on non-corporate tickets.”

So where does the balance tip? How important is it to Uefa to have fans from the two teams in the stadium and is it more or less important than pleasing the ever-growing number of sponsors?

“Matchday revenue to a certain extent is an irrelevance in comparison to sponsorship and TV money,” explains Maguire.

“They do set high ticket prices because they know that if they don’t then the touts will make even more money. In general they know demand will exceed supply. There is a breaking point but we’ve not reached it yet.

“The match was sold out too so Uefa can say that they’ve not overpriced because they could have sold three or four times more tickets. It’s a function of the fact that, in general, people have more disposable income and they’re prepared to spend more on entertainment.”

With a brand new airport making Istanbul as accessible as any other city in Europe, next year’s final in the Turkish city could well see the allocation balance continue to tip further away from regular fans.

1 Dave Hannigan: Notre Dame’s Fighting Irish leprechaun needs its ass kicked
2 Sonia O’Sullivan: Running in a bubble as the shoe wars raged
3 Rafael Nadal: A mental giant who plays every point as though it’s his last
4 Stephen Kenny undaunted as a bold new era beckons for Ireland
5 Felipe Contepomi: Lockdown a double-edged sword for the likes of Johnny Sexton
Real news has value SUBSCRIBE
Crossword Get access to over 6,000 interactive crosswords