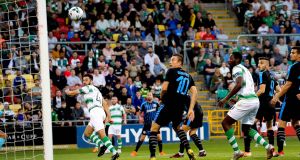 For a second week in succession Jack Byrne was at the heart of things as Shamrock Rovers came from behind to beat opponents who might have made the mistake of arriving in Dublin believing they could count on being the better side.

With the away leg to come this time around, there is still plenty of work to do against a Cypriot side that started brightly but was very well beaten by the end. Rovers, though, will wonder quite how they didn’t give themselves more of an advantage to take into next week by adding to the goals scored by Lee Grace and Roberto Lopes.

Like Dundalk the night before, Rovers had a major hand in the goal that handicapped them early on here with Greg Bolger’s poor first touch just in front of his own area setting off a chain of events that ended moments later when the Apollon skipper, Fotis Papoulis, powered the ball beyond Alan Mannus.

The fear, as at Oriel, was that that the goal might be an ominous sign of what was to follow but the Dubliners took far less time to dispel the notion.

Apollon had pace up front and plenty of power in midfield but they did not look at all comfortable defending a decent set piece, which is an obvious concern for any side facing Byrne. The 23-year-old midfielder had already caused the visitors a couple of missed heartbeats with a corner then a free and the opportunity that led to the equaliser arrived, just short of 15 minutes in. With another perfectly weighted free, he picked out Grace whose header came off the post then looked to have crossed the line before Daniel Carr arrived to help matters along.

The Dubliner was in his element here. As against Brann last week, his passing marked him out as the game’s most influential player, while all the endless gesturing when things went wrong ensured he was comfortably its most dramatic.

As he became increasingly assertive, the collective confidence of those around him grew and the Apollon threat seemed to quietly subside. Lopes got the home side’s second with a glancing header applied to an inch perfect free won by Ronan Finn and Grace came close to making it 3-1 when he hit the crossbar with a more powerful effort not long after.

It was compelling stuff by Stephen Bradley’s side who exerted the sort of control through the second half that Irish sides can generally only dream of but the third goal continued to elude them, most memorably when Aaron Greene beat the offside trap to chase down a long Byrne ball into space and successfully rounded the goalkeeper a long way out only to miss the target from an angle.

Yannis Gianniotas should really have grabbed one completely against the run of play late on but the visitors finished the game with 10 men after Esteban Sachetti was shown a straight red on Byrne.

They will be happy to have an away goal and a week to steady the ship. Rovers, though, will go there knowing that if only they can play like this again, there will be no stopping them in Nicosia.

1 Pete Sampras: The forgotten great with the best serve in the business
2 Cam Newton broke the mould: Can his flame be rekindled at the Patriots?
3 The unsolved mystery of Goran Ivanisevic’s stunning Wimbledon win
4 Tipping Point: DeChambeau’s transformation raises questions, but who will ask them?
5 The Game Changers: Vincent O’Brien, a pioneer who took Irish racing to the world
Real news has value SUBSCRIBE
Crossword Get access to over 6,000 interactive crosswords