Three wins in a row, plus Dundalk’s draw with Derry, sees City back top of the table 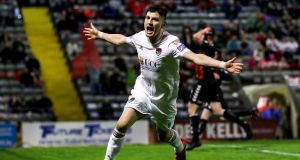 After their setback at the RSC a couple of weeks ago there was the danger that Cork City’s title defence might take a while to get back on the rails. Instead, goals from Colm Horgan and a seventh of the campaign for Graham Cummins here made it three straight wins for the southerners. The three points earned, combined with the two dropped by Dundalk, leave them sharing top spot in the Premier Division table.

For lengthy spells they looked as though they would be lucky enough to win this one but Bohemians didn’t quite have the wherewithal up front to capitalise on the possession they enjoyed through long periods of the contest. Dylan Watts was again the star of their show and the excitement generated by his sense of adventure more than makes up for the occasional bouts of overconfidence that might, on another occasions, have proven most costly.

After an early stroke of good fortune, however, Cork’s character ultimately saw them through while in Cummins, John Caulfield had something that Keith Long simply lacked on the night.

The City manager’s complaint before the game had actually been that his side, with a goal a game to show for their last three outings, weren’t taking their chances but their opener here suggested that maybe they were just trying too hard. Colm Horgan, in any case, didn’t seem to be trying at all when he played a neat exchange with Barry McNamee before curling the ball into the box. It bounced awkwardly in front of Shane Supple who might have been put off too by Cummins’ attempt to get a touch but the goalkeeper may still have been wondering afterwards exactly how he was beaten at his far post.

City’s stroke of luck might have been the start of something had Bohemians not held their nerve but what was striking after things settled was the confidence with which Keith Long’s young side took the game to the league champions.

The combination of Watts driving the side forward from midfield and runs made beyond the City defence by the likes of Keith Ward and JJ Lunney threw up a succession of serious scoring chances. Mark McNulty, to be fair, reacted smartly on a few occasions to cut out the danger but there were enough attempts on goal to suggest that his back four’s luck was going to run out at some stage.

They certainly must have been relieved towards the end of the first half when Eoghan Stokes passed up a couple of chances with the striker’s first effort lacking the power to test McNulty while his second skipped low but slightly to the wrong side of the left hand post. Lunney then missed the target too to leave Long, one suspected, wondering quite how his side had quite so little to show for a wonderfully bring 45 minutes of passing, attacking football.

Caulfield’s take on it all was probably a little different and the visitors returned with that added bit of bite often acquired as a result of a full and frank critique of a first performance by a manager. Bohemians suddenly had a little bit less space to run into and City worked that bit harder to close them down and ultimately win possession. Jimmy Keohane was one of those to belatedly announce his presence on the pitch; Karl Sheppard on the other hand remained peripheral and just nine minutes into the second period the manager replaced him with Kieran Sadlier who wouldn’t be long about making his mark.

Watts, meanwhile, continued to sparkle at time with his energy and distribution dictating the home side’s temp. It was Dan Byrne, though, who looked to have sent Stokes clear through just over an hour in but the young striker was dispossessed by Conor McCarthy as he tried to cut inside. Moments later, it was 2-0 to City with Bohemians caught cold as Sadlier releasing Cummins with a quickly taken throw that sent the striker goal-side of Rob Cornwall.

The angle of the striker’s approach made things tricky as he raced towards Supple. The finish to the top right corner was perfect, though. If his players converted all of their chances like that, Caulfield could surely have no complaints at all.